The Bubblegum - Little Red Bucket/ With The Sun In Your Hair 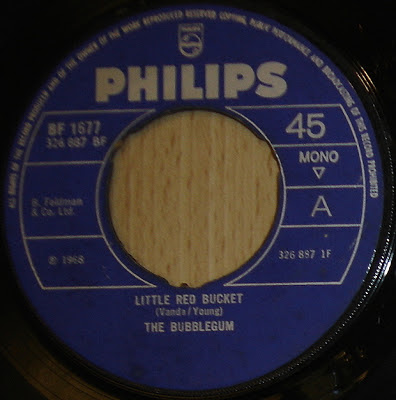 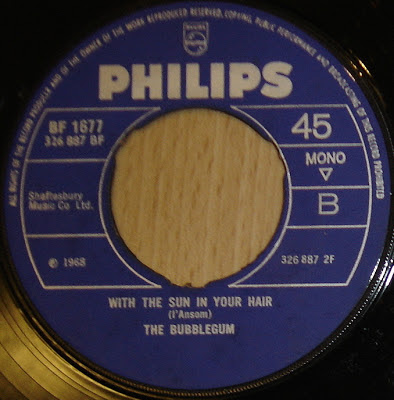 Another Vanda and Young composition for your delectation here, readers, this time performed by the Leicester-based Bubblegum rather than a member of American garage rock royalty.

"Little Red Bucket" snarls in the way that this week's previous entry (Jamie Lyons Group's "Gonna Have A Good Time") probably failed, being chock full of abrasive, distorted garage guitar and a simultaneously bubblegummy yet somehow slightly irate sounding chorus - imagine the 1910 Fruitgum Company being chased by a cloud of angry wasps.  It's clear that the record was probably supposed to have a been a bit of a plastic pop hit, but obviously the producer had other ideas and pushed the needles into the red during the recording and mixing process, making what could have been an also-ran piece of froth into an energetic and enjoyable single.

The B-side, on the other hand, is the most B-sidey sounding sixties flip I've uploaded on to this blog in many a moon, and probably isn't worth your time or trouble.

Not much is known about The Bubblegum except the fact that they previously operated under the name  Deuce Coup - anyone with any further information should feel free to get in touch!

Excuse the pops and clicks on this record, by the way, the record has had one very deep clean and the mp3 file has been through one filtering process, but it was going to be a horribly tough job to get rid of all the mess.  "Excellent Condition!" my eye.

Email ThisBlogThis!Share to TwitterShare to FacebookShare to Pinterest
Labels: sixties, the bubblegum, vanda and young