Sons of the Piltdown Men - Mad Goose/ Be A Party 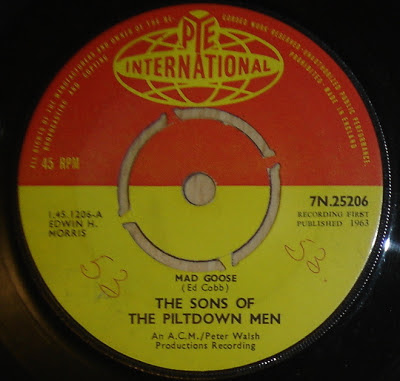 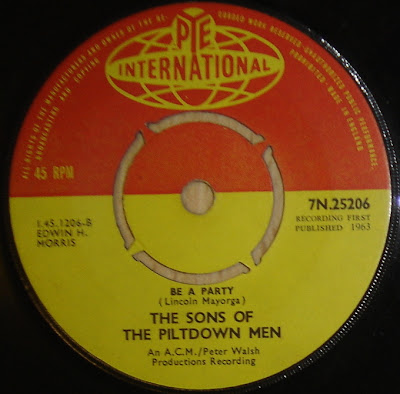 Ed Cobb's Piltdown Men were one of many popular instrumental acts formed during the late fifties/ early sixties, in this case hailing from Hollywood.  Despite their American origins, they had a greater degree of success in Britain, having three top twenty hits here ("McDonald's Cave", "Piltdown Rides Again" and "Goodnight Mrs Flintstone") while the USA largely looked the other way.

The identity of The Sons of the Piltdown Men is something of a mystery to me.  Main man and Four Preps member Ed Cobb wrote the A-side to this platter which would indicate that he still had some involvement, but I suspect that some changes within the rest of the line-up may have necessitated a sneaky name-change for this one 45. For a start, future Michael Palin and Terry Jones musical collaborator Barry Booth plays keyboards on this, and he most certainly wasn't part of the original Californian line-up.

Beyond that, there's nothing here to suggest any radical changes to their sound, but both sides are a frantic rave-up, with the flip "Be A Party" having a more likeable urgency to it. If you like honking saxophone riffs, rocking organs and driving beats you'll be quite at home with this, although obviously by 1963 this kind of noise was beginning to seem somewhat passé and the record-buying public stayed indoors with their Merseybeat discs rather than venturing to the shops to buy this.

The collapse of The Piltdown Men didn't stand in Cobb's way. Once this was done and dusted he moved on to a highly successful career as a producer, engineer and songwriter, penning evergreen hits such as "Dirty Water" for The Standells and "Tainted Love" for Gloria Jones, as well as working with Fleetwood Mac and Steely Dan.  Unsurprisingly under the circumstances, The Piltdown Men have become something of a footnote on his CV.

Anyone else wants a FREE MC DONALD'S GIFTCARD?