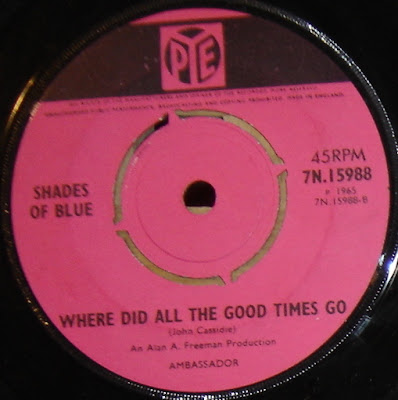 Sadly, this isn't the best offering I could have served up from Newcastle's undersung beat heroes Shades of Blue. Why, that would be their electrified cover of Hoyt Axton's "Voodoo Blues", a brooding piece of pre-Jim Morrison blues rock which sounds as if it was recorded a lot later than its 1965 release date.  Regrettably, I've been trying to hunt down a reasonably priced copy of that for years to no avail.

This perfectly good double-sider, on the other hand, is no easier to come by but does at least retail at a more reasonable price for the cash-strapped.  It demonstrates that behind the creeping atmospherics of their other disc on Parlophone did lie something of a conventional beat pop sensibility (if a rather angst-ridden one).  The influence of fellow Geordies The Animals is clear, but on the flip "Where Did All The Good Times Go" there's a similar introspection to the kind Ray Davies was employing at the same time (though the similarity of the title to a celebrated Kinks track is probably a coincidence).  Nothing about either side screams "hit single", but this does seem to show that the band might have possibly had a crack at success had anyone persevered with them past their only two singles.

Not to worry.  Decca later picked them up (with an inevitably altered line-up) as The Toby Twirl in 1968 and they went on to record a number of rather more summery discs for them, including the much-compiled "Toffee Apple Sunday". None of their singles from that psych-pop period really stand up to "Voodoo Blues" in my opinion, which sounded challenging for the time whereas The Twirl sounded more like late arrivals to the hippy party.  But nonetheless, enormous respect is due to an act who had so much more going for them than the standard biogs and references would suggest, and certainly shouldn't be solely judged on their Decca output.

Shades of Blue did not come from Newcastle and did not morph into Toby Twirl. The band came from Surrey and I was the drummer. I now play guitar,blues harmonica,keyboards.mandolin and slide cigarbox guitar. I recently recorded my version of Voodoo Blues which is now posted with pics of the band on my YouTube channel itsPapaGeeMusic.

Thanks for letting me know! This mistake has also been printed in the latest edition of "The Tapestry of Delights", which lists the group as hailing from Newcastle and also the Toby Twirl connection - so be prepared for many more misunderstandings of this kind.

Is your name Tony Gooden?