The Village East - Building With A Steeple/ Tumblin' Down 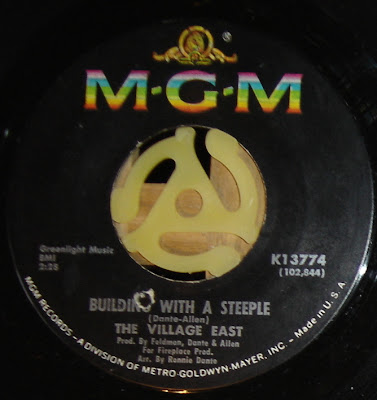 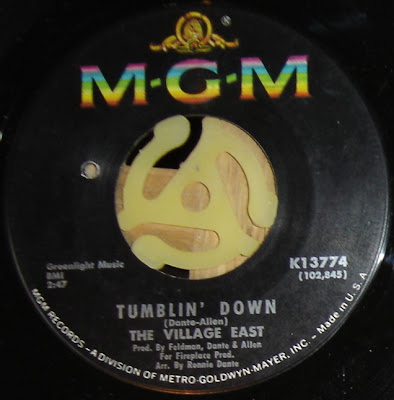 I'm not really too sure why or what's happened, but a freightload of American Sunshine Pop records - a lot of them on MGM, and almost all of them relatively obscure - seem to have washed up on British shores in recent months.  Some collectors assumed that this one never made it past the promo stage, for example, but here's the stock copy as living proof, live and at large in the UK.

"Building With A Steeple" is probably the best example I've found yet, scrubbing away any edgy credibility it might have with a Christian message and yet sounding so downright lovely it's hard to understand how anyone could resist.  There's not much originality present here as the vocal harmonies and arrangements echo the likes of The Mamas and Papas, but crucially it's not inferior to their work in any way and was clearly extremely unlucky not to have sold in greater quantities.  There's a yearning to the vocals and an intricacy to the delicately strummed and plucked arrangements which would soothe the most troubled soul, and like all the best West Coast sounds from the period it sounds simultaneously lush and sincere.  The very concept of sanctuary in a church on a blazing hot Californian day sounds thoroughly appealing here.

Sadly, The Village East didn't release any singles after this one effort, as apparently the lead singer (whose name I've been unable to locate) immediately left to pursue an unsuccessful career as a solo artist after this flopped.  There's a sense that a lot of potential was wasted here, and my guess is that if they'd released some more tracks of a similar quality they may have broken through.  As for the song, it was also recorded by The Eighth Day (with a near-identical arrangement) and Frank Sinatra Jr.

Ron Dante (session singer of The Archies and The Cuff-Links)? And Feldman (one of the trio who produced The Angels and The Strangeloves)? Interesting. Really nice. Thank you.

That's probably absolutely right, KL! Thanks for pointing that out.

Hey, my uncle Terry McAloon was one of the singers in this band. Lead singer was named Nancy, but can't recall last name. Jamie "Gallo" Holloway was the other member.

I have a picture of the three of us. Pretty old of course. I'm Jim Holway 8137589759
jholway@tampabay.rr.com. I tried to upload it but I couldn't. If you email me I will send it
to you. I think that it is great that you posted this. I don't know if you ever look at it
anymore since it was from 2013.

Hi Jim - many thanks. I've just dropped you a line.