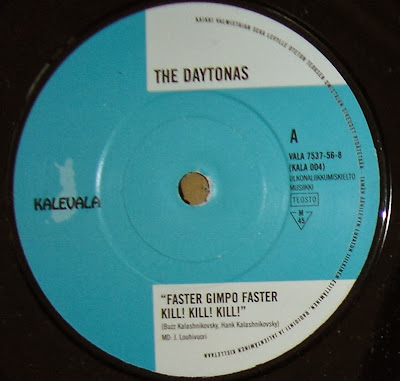 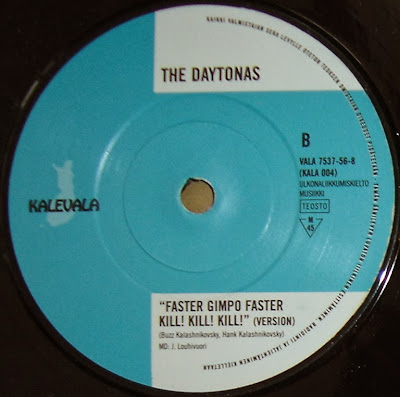 Some time ago, you may remember me talking about Zodiac Mindwarp and Bill Drummond of the KLF collaborating on a project in Finland consisting entirely of imaginary bands releasing one-off singles in limited runs of 500 copies on the here-today-gone-tomorrow label Kalevala records.  I have already written about one of these items, Dracula's Daughter's "Candy", and I was absolutely staggered to see this one turn up in a local charity shop for £1 recently. Obscure limited edition singles with links to the KLF don't just turn up in thrift stores with dismissive price tags attached, after all - that's the stuff of fantasies, like Beach Boys acetates being left on garden walls.

It's an especially thrilling turn-up for the books as this is one of the prime cuts of Drummond's last real music industry folly.  While some of these Kalevala singles trough into mediocrity or just plain silliness, "Faster Gimpo Faster Kill! Kill! Kill!" is a spot-on parody of early sixties surf guitar music, featuring throttling guitar riffs, a squeaking organ, a stripped back drum kit, dramatic flourishes and hollering backing vocals akin to the Red Army Choir.  Only the stereo mix betrays the modern origins of the record and makes it sound like a nineties rather than sixties construction, the roughness and rawness of the sound is in all other respects perfect.  If this were an actual obscure sixties record, there's no question it would have made it on to this blog on its own merits.

The B-side, on the other hand, isn't a proper remix as one might suspect but the original track overloaded with sixties studio effects.  Even Joe Meek would have stopped short of calling it a good idea.

As for why the Kalevala project existed in the first place, Drummond is oddly forthcoming in his book "45": "The fact was, none of these bands existed anywhere but in our imagination.  Mind you, that's where all great bands exist. Being in a band or into a band is all about building, living out and worshipping (or loathing) a myth.  Doing it this way, Z and I were safe from confusing our various alter egos with our real selves".

He goes on further: "When people ask me, 'Don't you miss the music business, Bill?' I try to tell them that the music business is about making unsuccessful bands successful.  Successful bands by their very definition are as interesting as packets of cornflakes.  No, it's strange, weird, fucked-up, unsuccessful pop music I dig.  Deluded pop music that wants to be successful and can't understand why it isn't…. records from places far away, by people who have no understanding of how things work in the worlds of London or LA but think they do. Records with crap sleeves".

And that, my friends, feels like the perfect statement to start "Left and to the Back" rolling again.

As for my lucky charity shop find, you may ask whether I slyly dropped the organisation some extra money to make up for their pricing mistake.  To be honest, I haven't yet.  This is because at the beginning of the very same month I found this record, I also dropped a rare KLF record into another charity shop in another part of London as a gift to them.  Something about the serendipity of The Daytonas seven-inch turning up later on made me believe that perhaps this was all supposed to happen. But you're right, I'll probably write them a cheque soon.

Welcome back ... and with a very cool find! Thanks.

What year was this released ?