Sounds of Lancashire - Sliced Tomatoes/ Back to Bach 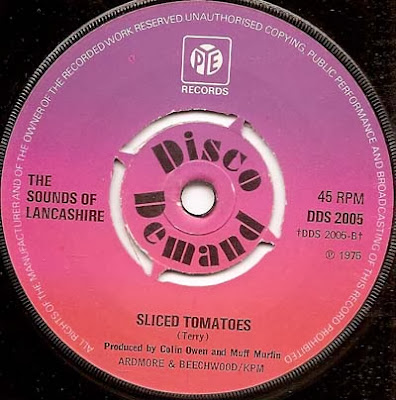 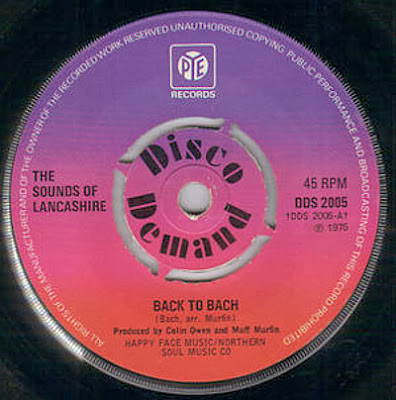 I suspect the fact that Fatboy Slim sampled large chunks of The Just Brothers "Sliced Tomatoes" and plastered them all over "Rockafeller Skank" is a known fact even to the laziest of sample-spotters these days.  Already a Northern Soul classic by the time Norman Cook found other uses for it, the Brothers' sparse yet strangely brilliant track enjoyed a revival in clubs and on the airwaves after his plundering, and hasn't really gone away since - in fact, Demon Records put out a 7" vinyl reissue only last month, much to my relief as I'd been after a reasonably priced copy for some time.

What is perhaps less appreciated is the fact that Fatboy Slim was not the first person to get his grubby paws on it.  Back in the seventies, numerous record labels in the UK - Pye and Spark being the most notable criminals here - were quick to spot trends on the Northern Soul circuit and often put out cover versions of the main floor fillers which had often been long unavailable over here, if they were ever available at all.  Largely consisting of session musicians watching the studio clock, these rush-released discs veered in quality from being fair facsimiles to downright shoddy.  If you look on ebay, you can still see many of them, even the rarest ones, up for sale at bargain basement prices. There's a simple reason for this - nobody wants them.  They're the vinyl equivalent of the boyfriend or girlfriend everyone went out for a week because they looked a tiny bit like somebody else they fancied a lot more.  Do not DJ with any of them if you value your life, or at the very least your reputation.

"Sliced Tomatoes" by the mysterious Sounds of Lancashire takes things one step further, however. Noting the sparseness of the original, the session musicians in this case have decided to "helpfully" spruce the gaps in the record up with some burbling analogue synthesiser tinsel, creating a Moogy Wonderland disco record where a Northern Soul one should more logically be.  It bubbles and squeaks its way through the familiar Just Brothers riff like something out of a parallel universe where a Lieutenant Norman Cook of NASA was born twenty years earlier and dicked around with early synthesisers rather than turntables, probably wearing a spacesuit and saluting a lot during his routines.  I'm not making a case for this actually being good, mind you. Anyone expecting a Northern Soul version of Stereolab is going to be horribly disappointed.  However, it's absurd enough to warrant coverage on a blog as ridiculous as this one.

The actual proper A-side "Back to Bach" is another remake, this time of the brilliant "Bok to Bach" by Father's Angels.  That version covers similar territory but doesn't do so in as interesting a way.

Happy New Year everyone, by the way! I do have some genuinely good and completely obscure records lined up for the next couple of months at least, so don't surf away just yet. Please.

I'm always a fan of cheap cover versions, and this is particularly ripe. Thanks!

Glad you enjoyed it. It certainly doesn't sound anything like you'd expect a cover version of "Sliced Tomatoes" to...