Reparata - Shoes/ A Song For All 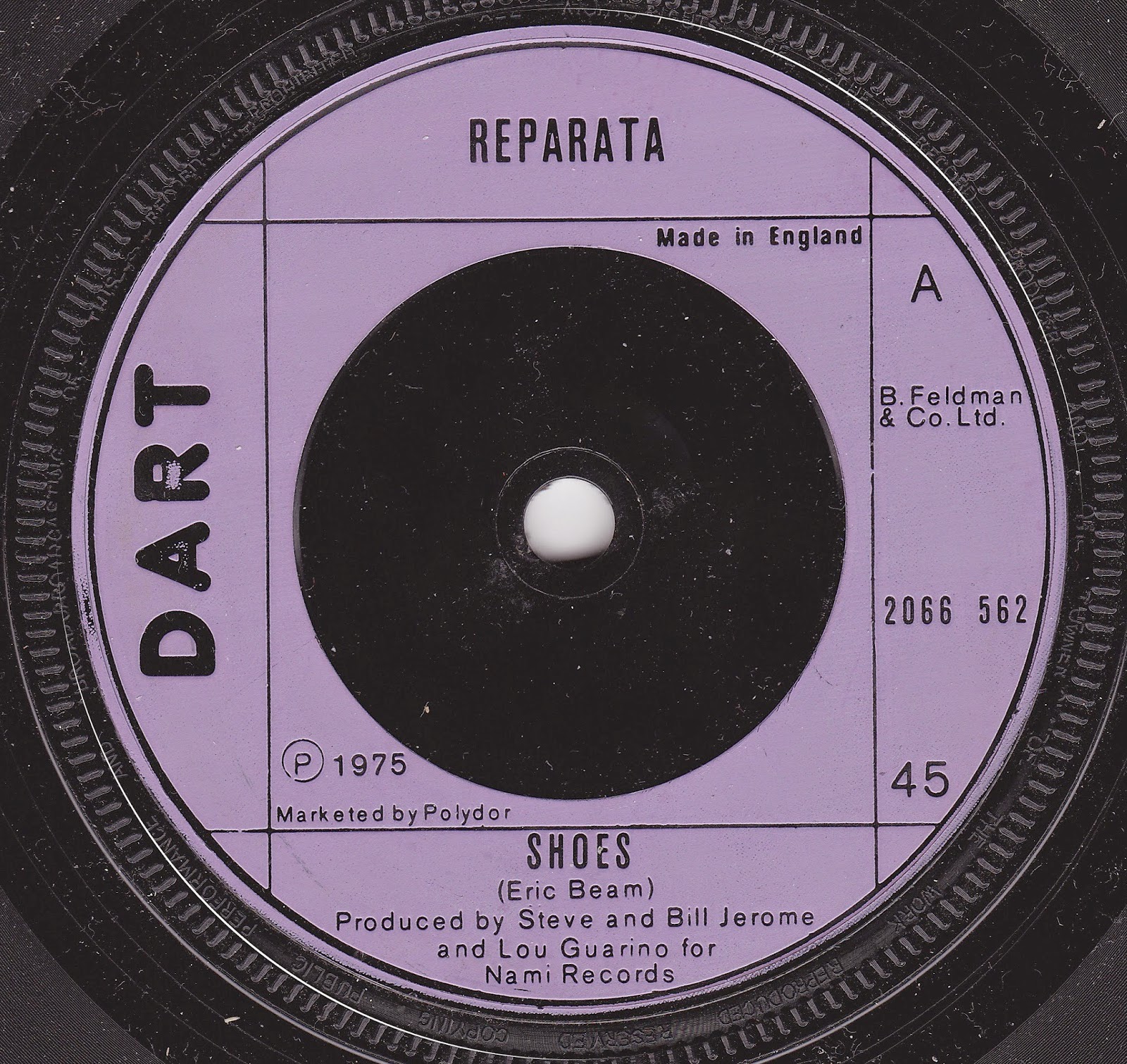 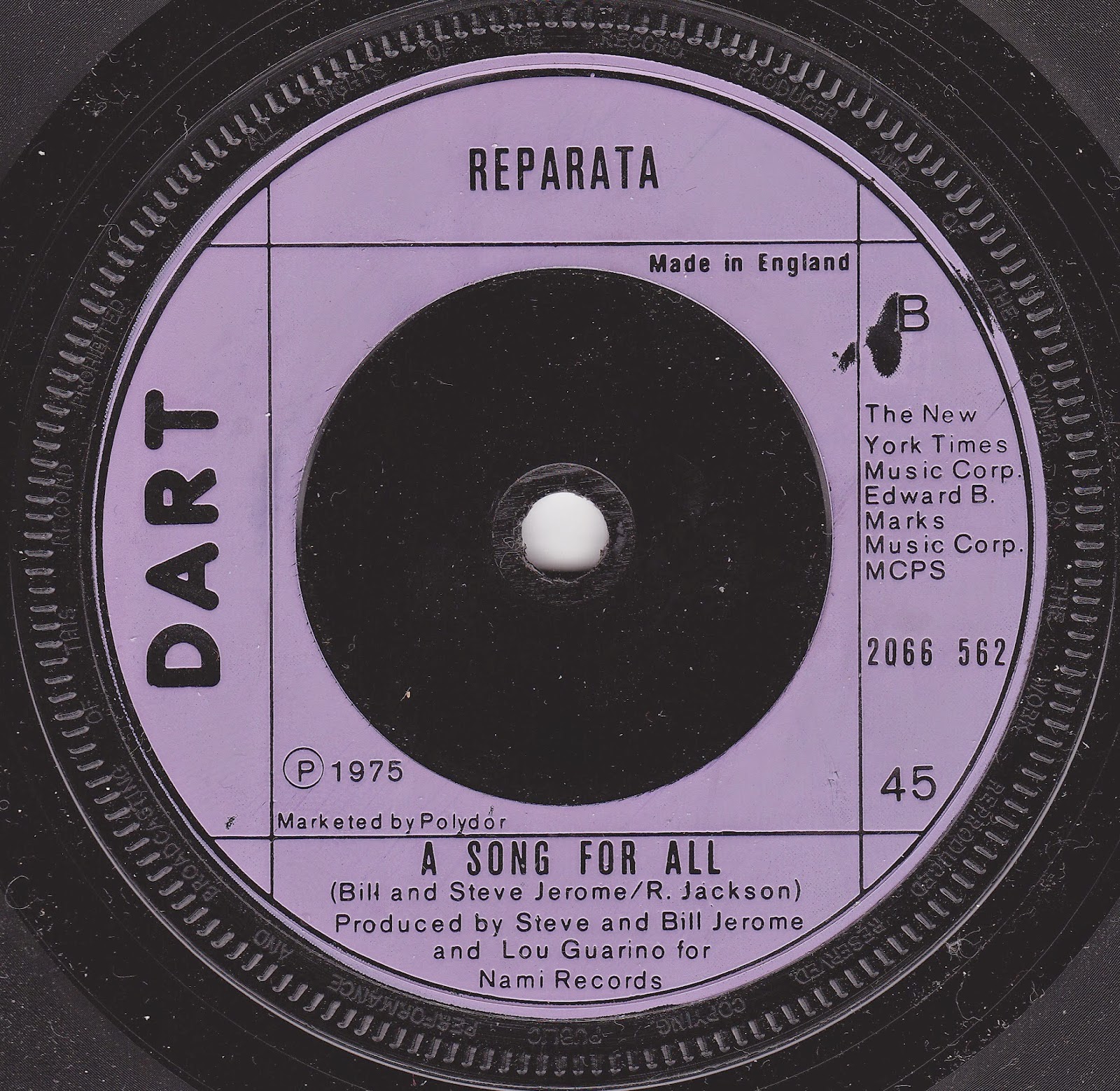 1975 isn't renowned for being a year when a lot of quirky pop music found its way into people's lives, and the public were clearly crying out for some slightly skewed musical moments. They nearly got some, too - for this single is a prime example of something which only fell by the wayside due to a particularly tangled web of misfortune.

Reparata had previously had a modestly successful career with the sixties Brooklyn outfit Reparata and the Delrons, whose chirpy "Captain of Your Ship" single burst out of the USA and took the world by storm. Later in the nineties, to the complete befuddlement of everyone in the UK (or at least me) the very same song enjoyed a slight revival as the backing to a Mullerice advert, with Reparata's trilling, girlish words being mimed by a cartoon captain with an Uncle Albert beard who appeared to be commandeering a man's stomach. But let's park that thought for now, viewers, because things start to get even more confusing in a minute.

"Shoes" was originally issued as a promotional copy by Surrey International in 1974, then failed to make the shops for reasons which are unclear. Polydor picked it up for release in 1975, it became Tony Blackburn's single of the week, then immediately ran into enormous legal difficulties. Firstly, one of the remaining members of the Delrons claimed the rights to the Reparata name, and issued a legal challenge. This failed, but no sooner had that case been dropped than the independent D'art Records emerged crying foul, issuing an injunction and insisting that the rights to the single were actually theirs under the terms of a previous contract and Polydor had no business to be releasing it. Tedious music industry chaos ensued for some time before a compromise was reached whereby copies would be produced on both the Polydor and D'Art labels, both distributed and pressed by Polydor, with the profits presumably split in some undisclosed way.

Trouble is, by the time this resolution had been reached, radio had lost interest, the public had forgotten all about the record, and it stalled just outside the Top 40. And that's a ridiculous shame, because "Shoes" is a bizarre concoction - like a traditional Eastern folk song tugging on the sleeves of art pop, it skids and trips along so many different directions that it's actually fascinating. Filled with angelic backing vocals, a doomy, matter-of-fact vocal, and a worrying undercurrent, its observations on a family wedding day suggest some disquieting background is being left unsaid (or unsung).

It was rewarded in the South African chart where it climbed to number 6, but that really was the sole prize it received and Reparata's career never quite scaled the heights of the Delrons era again, although - as we may see at another time - her back catalogue is filled with some other oddities besides.

As for the song itself, it had been recorded by a variety of earnest folk artists (The (New) Settlers among them) before Reparata got her claws into it and really gave it a new atmosphere.

Thanks to regular reader and commenter Arthur Nibble for suggesting I cover this one.

great fun that could have been a hit
liked captain too didn't that have the ship's horn and clanging at the brginning a bit like that steve miller song?

I didn't know this part of her history. What I do know was that she was one third of Barry Manilow's backing vocal group, Lady Flash, during this same period. They had a "solo" LP in the mid-70s, and neither of these tracks would have out of place on it.

I think that's the "other" Reparata (aka Lorraine Mazola), VanceMan. the one who tried to sue the original Reparata for her continuing use of the name.

It's all so very confusing.

Nonetheless, I'll keep an eye out for that LP!

I have an MP3 of the original by Felix Harp and it certainly has the exact same backing track as Reparata. But it is less menacing and slightly country rock in vocal style, would really love to know the story behind that backing track...

Is that Jews Harp twanging away in the background? There are some rather unusual instruments on this track. The other "odd" track which I remember from this period was "Too Much Fandango" by Ritzi, which actually was a hit here in Australia in 1976.