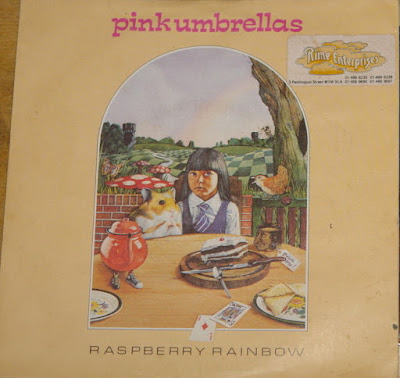 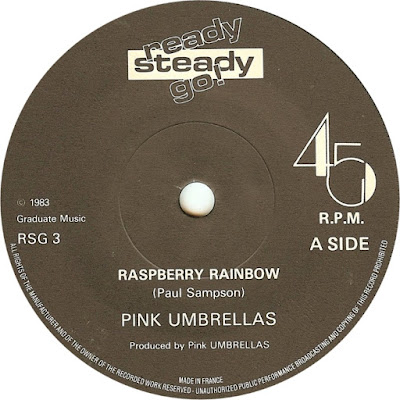 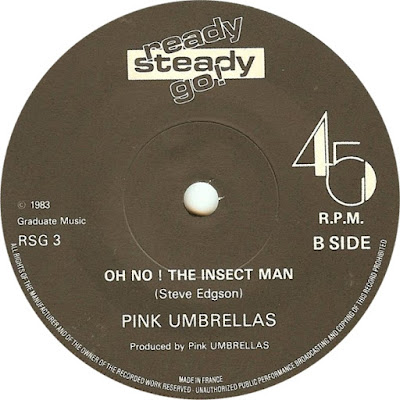 
We last explored the work of Paul Sampson back in August, examining his stint in Coventry ska band The Reluctant Stereotypes. Following the failure of that group to generate significant sales, he and fellow Stereotype Steve Edgson appeared to waste very little time in moving on to their next project, psychedelic pop revivalists Pink Umbrellas, joined by Rob Hill on drums and Barry Jones on bass.

Most readers won't need me to underline the fact that there was quite a significant revival of sixties ideas in the early to mid eighties, although most remained entrenched firmly underground. From the Paisley Underground in America to a lot of the early output of Creation Records, right on to XTC's fantastic recordings under the name The Dukes of Stratosphear, the reaction against clean, smooth, synthesiser dominated productions spread notably. If you wanted to, you could make a serious case for the movement never really disappearing and popping overground by '89, via The Stone Roses, The Charlatans, and Inspiral Carpets. Certainly, all three groups had a keen ear for those sounds, and John Leckie was largely chosen to produce The Stone Roses debut on the basis of his work with The Dukes. Beyond that, the twee, jangly elements did also seem to get hoovered up by many C86 bands such as The Pastels.

A big reason why so much eighties psychedelic revival material gets overlooked these days probably boils down to two simple problems - the slightly pristine production you often got, and the fact that borderline parody often seemed to be the order of the day. Doctor and The Medics may have played a huge part in the revival with their regular appearances at Alice In Wonderland club nights, but there was always a sense that they were having more fun playing with some clothes in the dressing-up box than they were writing brand new psychedelic classics.

So then, Pink Umbrella's "Raspberry Rainbow" is a likeable peculiarity, but definitely on the same side of the fence. Over and above a great many other efforts of the time, this is actually a fairly accurate take on the twee end of popsike, but one which nonetheless sounds incredibly tongue-in-cheek, almost Thamesmen era Spinal Tap in its stylings (though I must admit on first play that I thought it sounded like an obscure Blur out-take). The B-side "Oh No! The Insect Man" finishes the job with some silly sixties sci-fi leanings, sounding like the work of people who have watched rather too many late night black and white repeats on the television rather than taken any hallucinogenic drugs.

There's no question that the stylings of "Raspberry Rainbow" and its flip are affectionate rather than sneering, though, and it was respected enough at the time of its release to gain some Radio Two airplay, doubtless to an audience hungrier for new sixties-styled sounds than elsewhere. That wasn't enough to cause it to chart, and there were to be no follow-ups. An LP was apparently recorded but so far as I can tell never released, and all we're left with is this curio.

Paul Sampson went on to work with The Primitives and became a respected producer. A final twist in this particular tale is the fact that The Stone Roses apparently had him shortlisted to produce their debut, but their message of interest didn't reach him until John Leckie had been booked and it was all too late. Given the exemplary work Leckie did with XTC for The Dukes project I have to doubt Sampson's production on the Stone Roses debut would have been better, but who knows how things might have turned out…

Thanks to the record label for this offering, you reminded me to iTune the only hit on Ready Steady Go, "Heartache Avenue" by The Maisonettes. Well played!