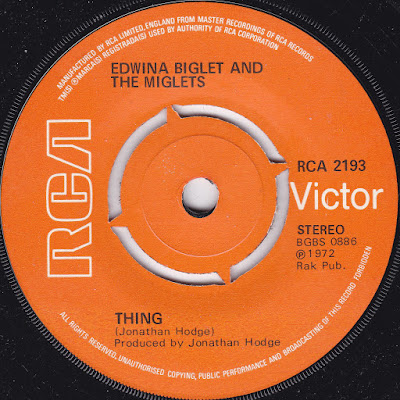 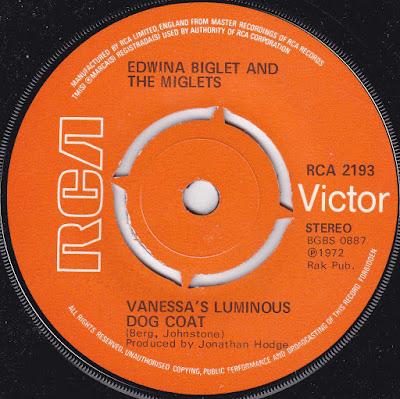 Nothing causes me to gravitate to a flop record more than a completely ridiculous group name, and if the song titles are off-the-wall as well, then my money is as good as yours (provided, of course, we're not talking excessive amounts. I'm not that stupid). Edwina Biglet and The Miglets is arguably as stupid a name as seventies glam rock ever spawned, and for that at least we have to salute the individuals involved.

More than that, though, "Thing" is is a chirpy Moog-infested track about... er... well, it's not really clear exactly what it's about, actually, and I doubt if you asked anyone involved they'd be able to tell you either. The intro promises an utter proto-techno noisefest, but it quickly calms down and establishes itself as something altogether more vacant and silly. The lyrics seem to involve various characters with different English accents bragging about a "thing" they own. It could be sexual innuendo at work, but the descriptions given defy logic and reason, as the "thing" is described with electronic squelches, buzzes and bleeps. It lights up, it's fun to play with, people think it should be banned, and your guess is as good as mine.

More appealing to Moogheads out there is probably the B-side, "Vanessa's Luminous Dogcoat", an almost groovy jam which, had it been released by some obscure French artist would probably be commanding insane money on eBay now. As it stands, we're left with a record that neither charted - despite receiving modest amounts of airplay - nor really holds its head high in the collector's market, which given the double-sided oddness on offer seems a bit unjust. It won't be the best single you hear all year, but there's something irrepressibly charming about it.

The complete details of who Edwina Biglet and The Miglets are isn't easy to find, but the lead singer Edwina dropped by on 45cat a number of years ago to reveal that her real name is Vanessa, and that the B-side was named after an actual jacket she knitted her greyhound. So at least we know something. If anyone has any additional information, please let me know. In a parallel universe somewhere, I'm sure this record was probably an extraordinarily irritating and huge hit.

Don't have much to add other than Jonathan Hodge who created the group along with his secretary Vanessa also wrote the Shake 'n' Vac advert and other TV related material.

It's quite a novelty isn't it? I picked up a copy on vinyl many years ago then got a CD version when it appeared on the glam rarity disc 'Glitter From The Litter'

Thanks for that, Steve - I hadn't quite made the connection. Now you've mentioned it, it definitely figures, though!