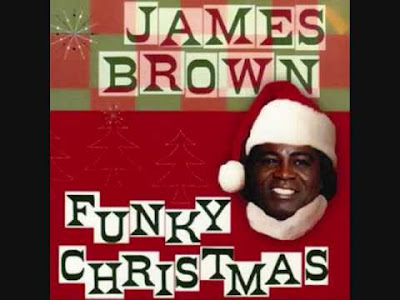 It's that time of year again when "Left and to the Back" breaks for Christmas - there's very little point in keeping the blog updated over the festive period, as barely anyone checks in, having better things to do with their time (or perhaps worse things, depending on your point of view) than read about old flop records somebody has found in a record or charity shop. And with that in mind... Merry Christmas Everyone!

Usually at this time of year I find myself wondering whether "Left and To The Back" will last another year. I wondered it at the tail end of 2008 when this whole ridiculous project began, and I'm sure I'll always scratch my head close to New Year's Eve and debate whether it's really possible that I can wring another year's worth of entries out of my ever-expanding record collection. And far apart from that, will I want to, or will I begin to get deeply bored or have other concerns in my life which end up taking greater priority? And will Spotify and iTunes finally have such a complete catalogue that blogs like this begin to look silly in their mission to present long unheard sounds?

It's impossible to answer. When "Left and To The Back" started, it was rough and ready. I still get a bit embarrassed when someone leaves a slightly sarky comment on one of the early entries picking me up on poor research or perhaps being offended at my slightly surlier writing style - but deleting the lot would feel dishonest, somehow.

Anyway, you could argue that the format only really sorted itself out when mp3 blogs began to be seen as somewhat passé by the world at large. It had a few brief media mentions here and there until 2012 - none of which I sought or used contacts to obtain, by the way, that assumes a degree of influence I just don't have (and you can sound the Sandi Thom klaxon all you want, but it does happen to be the truth in my case). Since then, it's been pretty much unpublicised and left to its own devices, yet the audience levels have steadily grown, and in fact November 2015 saw the second biggest number of unique hits in the blog's history, and the biggest number of returning visitors. If I do turn my back on this in 2016, it definitely won't be due to external disinterest, and I'd like to thank everyone who takes the time to visit this blog and read about a bunch of records nobody bought. Let's face it, it's hardly the format of anyone's dreams, it doesn't really smell of success, and I'm inclined to sympathise with the bafflement a friend of my wife's felt when she found out about this site's existence ("So... your husband writes about records nobody bought or liked, and people read it?")

But all this is veering dangerously close to self-celebratory waffle, which is another thing I find a bit cringeworthy. This blog is very niche and is never going to get the number of readers a well-written site focusing on new music will, but I'm glad enough of you enjoy it to make it feel like it's something slightly more than me talking to myself and a handful of other absurd people. Have a great Christmas, I hope Santa brings you a lot of under-appreciated musical gems, and see you for at least some of 2016, and hopefully all of it.
Posted by 23 Daves at 08:00

Thanks for all the digging this year - of course it's always going to be a niche interest, but it's a big niche, with depth to it, like a wedge of stilton.

Many thanks for your work here on this superb blog, with hard to find tracks for the roarin' sixties

Looks like a great track but I am still confused with how the download links on your site work ... lol

Thanks all of you! I hope you have a great Christmas.

Yer awesome, thanks for the top choons and wishing you a fantastic holiday season!

Just want to let you know that i am one of the regular visitors to your site but have never commented until now.
I do love the fact that there is people like your yourself who spend time finding and posting all these oddball records, if we all just listened to chart fodder or mainstream music what would become of us.

Keep up the good work and all the best over Christmas and New Year.

Even among the dross it is necessary to have a discerning curator to explain why some of the unloved cr@p from the past deserves a second chance. Your role is appreciated.

Thanks Andrew, that's very kind of you to say.