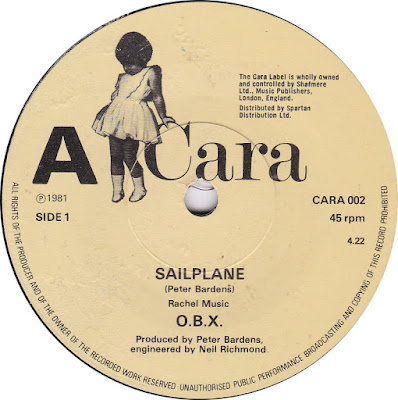 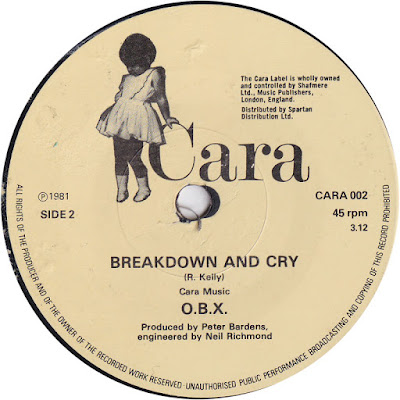 Of all the synth-pop obscurities that were spat out during the early eighties, this turned up on arguably the most unlikely label, and perhaps from a rather unexpected source for most. Cara Records were a tiny indie who, for the most part, acted as a home for Irish folkies De Danann. Peter Bardens, on the other hand - to all intents and purposes, OBX - was previously a keyboard player for cult prog rockers Camel, most famous for their "Snow Goose" concept album.

Unbeknownst to many people now, however, Bardens was fascinated enough with synth-pop to release an entire album of it entitled "Heart to Heart" in 1979. Experimentation with synthesisers and pop was by no means solely a fascination for young people weened on Kraftwerk and Eno. 1981 also saw ex-Hatfield and the North member Dave Stewart release the huge synth hit cover version of "It's My Party", and it's frequently forgotten that once The Buggles ceased their activities, Trevor Horn gatecrashed Yes to become their new lead vocalist. The new technology was obviously deeply appealing to people who had previously tampered with the boundaries of what was possible in rock music, or had a deep affinity with Prog. It's been said before by many better writers than me, but the connection between New Pop in the 80s and Prog in the 70s is stronger than often supposed (Those over-long extended 12 inch versions of just about every hit perhaps also mirroring some of Prog's more bloated album tracks).

"Sailplane" is actually an extremely strong release - dark, minimal and moody, with soft, detached sounding vocals, this feels like it's being beamed in from a contented but wintery dreamworld. The chiming keyboard patterns towards the end add to the icy impression, and like the best of the oft-underrated OMD, there's a slyness to the spacey arrangement here. What sounds on first listen very simplistic and hollow gradually reveals delicate flourishes towards the end of its run-time. Like the best of its genre, though, it knows exactly where to draw the line.

Needless to say, this wasn't a hit. Even if it had achieved airplay (which, to the best of my knowledge, it didn't) I doubt Cara would have had the marketing chops to really push it high in the charts. Whatever plans Peter Bardens had for the OBX name, they appeared to stop at this one single, and it melted away into obscurity.

Sadly, he passed away in January 2002, and while most of his solo and group material has been reissued in the years since, this one remains obscure and increasingly collectible. My copy is really scuffed and while I've tried my hardest to clean it up below, it's such a minimal piece of work that inevitable some of the crackle and hiss is still going to push through. There's a much clearer sounding version on YouTube you should really listen to.