The Decision - In The Shade Of Your Love/ Constable Jones 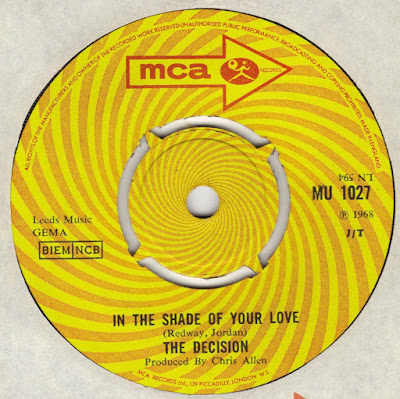 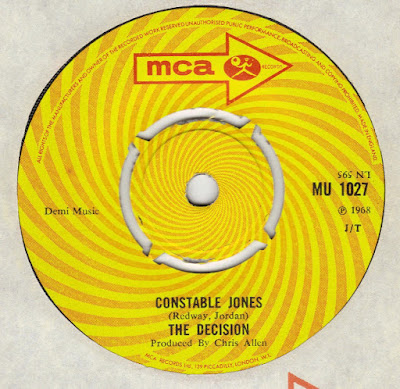 Very much a record of two halves, this one. The A-side, "In The Shade Of Your Love", is a carefully produced piece of summery psychedelic pop with puffing trumpetry, humming organs and a hazy atmosphere. In terms of British (as opposed to Californian) psychedelia it's one of the few singles to successfully soundtrack the scorching city humidity of an Albion summer, and deserves a lot more appreciation than it's received.

Unfortunately for us, the damn thing is commercially available on all the usual online outlets, so you'll have to make do with this YouTube clip to sample its delights.

The flip "Constable Jones", on the other hand, is unavailable and is so popsike it hurts. By the late sixties many songwriters found themselves very much inspired by Beatles and Kinks tracks penned about specific everyday individuals leading faintly desperate and rather ordinary lives. This lead to a slurry of similar flop tunes from the lesser-heard psychedelic pop acts of the day, from The Epics Arnold Layne-inspired "Henry Long" and Pandamonium's faded club star in "Chocolate Buster Dan" through to The Cuppa T's oft referenced (by Tim Worthington at least) "Miss Pinkerton". Many of these tracks lacked the subtlety and sensitivity of the tunes they were trying to ape and instead upped the cheesy quirk factor to ten. And these kinds of recordings, my friends, are also probably the epitome of the sub-genre of popsike - childlike, bouncy, chirpy ditties about small-town life which could easily have been rehoused in an early 1970s children's TV show without many people noticing or complaining.

"Constable Jones", it's safe to say, is an amusing sketch of a beleaguered policeman on the beat rather than a fully fleshed out portrait or even caricature. The details of the poor PC's under appreciated efforts are charmingly recalled, though, and the off-the-cuff additions about his eating habits ("It's your favourite - chips and kip-pers!") are unnecessary but if you're not smiling by that point, you genuinely have no heart.

The Decision only seemed to put out this one single before disappearing. "In The Shade Of Your Love" was unlucky not to have been a hit, so it's regrettable they weren't given further opportunities.

Email ThisBlogThis!Share to TwitterShare to FacebookShare to Pinterest
Labels: sixties, The Decision