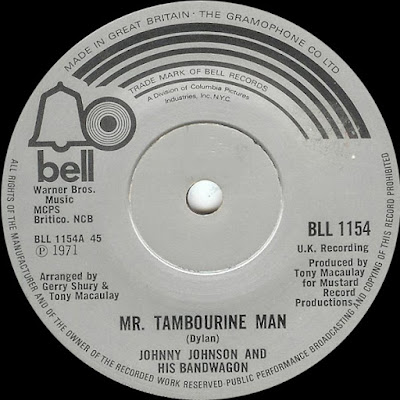 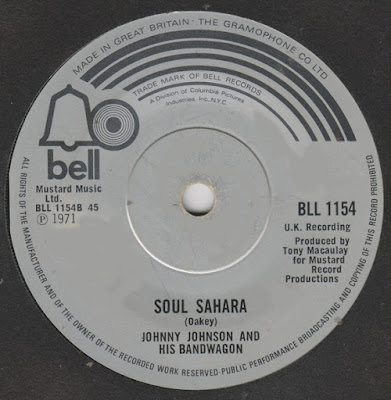 Johnny Johnson and His Bandwagon, rather like Geno Washington, were an American soul act who had far greater success in the UK. "Breaking Down The Walls of Heartache" was a number four hit in 1968 - even though, given its subsequent influence and club plays, it feels as if it should have climbed even higher than that - and whilst the original line-up of The Bandwagon failed to last into the seventies, Johnson was keen to continue to capitalise on his success outside of the States.

A whole variety of other singles were issued, including the top ten hits "Sweet Inspiration" and "(Blame It) On The Pony Express", shortly before this one was issued to public indifference. Your eyes aren't deceiving you - it is indeed a soulful rendition of the Dylan/ Byrds classic, complete with sweat, intensity and a great big brassy horn section. On first listen, it sounds frankly unnatural and absurd. So much is done to deviate from the original tune and arrangement during the introductory seconds in particular that it's hard to even hear what it has in common with Dylan's song, and it's only when a chipper version of the chorus kicks in that you're able to connect the dots. By the second listen, however, it's a pure joy to listen to, a cover version attempted in the spirit of all the best ones, using the original track as a springboard for different arrangements rather than a score to idly copy from. Some may scream "Sacrilege!", but it's actually no more or less of a deviation from Dylan's first recording than The Byrds attempted.

The fun doesn't stop there, either. The B-side "Soul Sahara" is a thing of wonder, with Johnson whooping and hollering his way through a funky backbeat and horn section as he forcefully takes us through a history of that thing we call soul, with all its accompanying sub-genres. That neither side seems to get played very often in clubs (unlike the group's hits) is a missed opportunity in my book - "Soul Sahara" has such a furious insistence that it's impossible to stay still while it's playing, whereas "Tambourine Man" is a wonderful talking point.

And all this gets me wondering - has there ever been a song which has attracted a more varied array of covers than "Mr Tambourine Man"?

Starting at this years archive and working back, this is the first one I've come across that I've actually got a copy of. I give it a regular spin on my 60's, 70's and 80's night on a Friday when I include as many obscurities as I can get away with. I've got literally 1000's of them, this blog is absolutely wonderful.

Come and see how THOUSAND of individuals like YOU are working for a LIVING by staying home and are living their dreams TODAY.
CLICK HERE TO DISCOVER