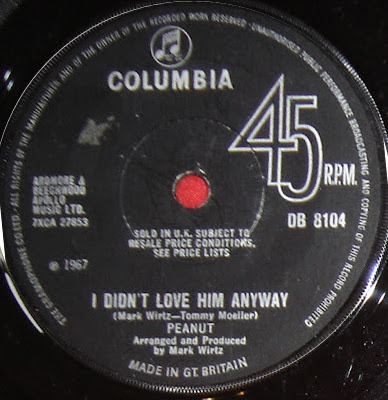 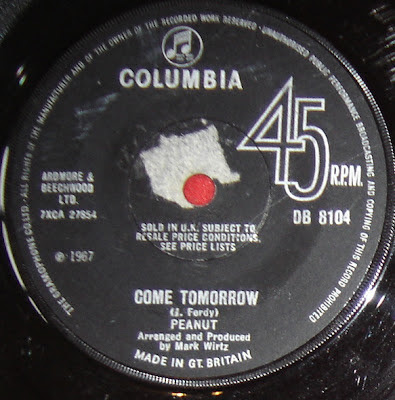 The German born Mark Wirtz is best known in the UK for writing and producing the number two hit single "Excerpt From 'A Teenage Opera'" (aka "Grocer Jack") for Tomorrow frontman Keith West.  Supposedly forming part of a stage musical which in actual fact hadn't been written yet, the project stalled when the follow-up excerpts "Sam" and "He's Our Dear Old Weatherman" (the latter performed by Wirtz himself) fared less well.  Each single was an densely orchestrated pean to eccentric or otherwise unloved elderly gentlemen within a small community, and was - with the exception of "Weatherman" which I own a copy of and find hugely irritating - actually rather wonderful.

We're in danger of being sidetracked here, however, because there was so much more to Wirtz than this one famous project.  Amongst other things, he was also the producer for Katie Kissoon, aka Peanut, a singer from Trinidad who had previously had two flop singles on Pye before being brought under his wing to record a cover of "I'm Waiting for the Day" for Columbia.  That particular track is a fairly faithful reading of the "Pet Sounds" classic which probably should have been a hit single, but when it failed, the pair turned their attention to the Wirtz penned "I Never Loved Him Anyway".

This single is a sweet, mournful and terribly under-exposed part of Wirtz's catalogue, being filled with the same delicate toytown arrangements as the "Teenage Opera" tracks.  Gone, however, are the references to aged eccentrics and in their place is an understated ballad with some beautifully delivered vocals from Kissoon.  It contains all the sense of loss and finality which peppered the Opera project, but feels rather more personal, especially during the gentlest, quietest parts of this record where Peanut simply harmonises to an understated backing.  It lacks any kind of killer chorus, and it's perhaps for that reason that it failed, but it does prove that the use of toytown arrangements could be utilised beyond sixties psychedelic fantasia - ballads like this made fine use of the technique to recreate an atmosphere of child-like yearning.

Kissoon later went on to rather more success duetting with her brother Mac Kissoon on hits such as "Chirpy Chirpy Cheep Cheep" (how many versions of this were there?!) and "Sugar Candy Kisses".  Once the hits dried up for them, she then put her fantastic vocals to use on sessions for (among others) Elton John, Roger Waters, Van Morrison, George Harrison, The Pet Shop Boys, Robbie Williams, and countless others.  Whether you think you've heard her before or not, you almost certainly have.

[This blog entry was originally uploaded in May 2012. I've nothing to add, except to mention that I actually sold my copy of "Dear Old Weatherman" a year or so ago alongside other rarities to finance a  much-needed holiday].

As I've stated on a different website, Mac and Katie Kissoon managed the highly unusual feat of a not consequential nap hand of the bottom five places in the top 50 in its only five weeks on the chart with a single called "The Two Of Us".

Thank you for this "rare" single