What Four - Stop In The Name Of Love/ Asparagus 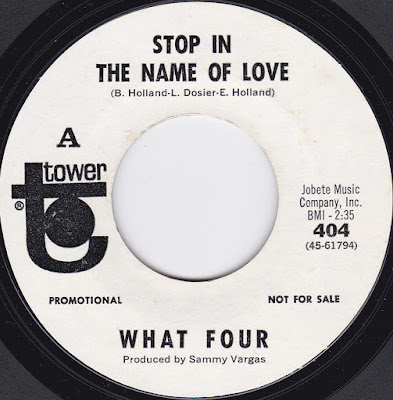 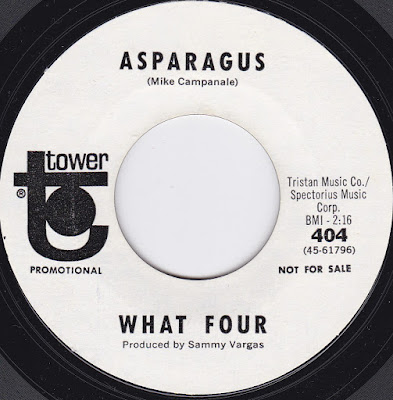 Once every so often I stumble upon a sixties garage punk single that really causes me to pull "WTF?" faces. This shouldn't happen often, of course... I've been around the block enough times to realise that a lot of garage singles are highly bizarre artefacts, so I'm already prepared. But still, when I purchased this one, I felt sure that what I'd be getting was an uptempo, abrasive take on the Supremes classic. And what I got instead was...

Well, it's hard to describe this version of "Stop In The Name Of Love". The first listen to it is highly perplexing, as the band choose to make all the most quirky sounds at the places you'd least expect them. The "Think it over" segment of the original tune, for example, is the calm after the huge warning sign of the chorus. What Four instead place a clanking, pounding riff behind it that makes it sound like an extension of the chorus's hysteria, the next level up. This is not a pop song anymore, it's the noise of five railway barriers sounding off simultaneously through valve amplifiers.

I had hoped that this might be a good single to DJ with, but I suspect it might actually clear dance floors. It's not a bad record by any means, and I actually enjoy its peculiar elements hugely, it's just too irregular for most dancers to be able to make a connection with. I suspect the point of inspiration may have been Vanilla Fudge's version of "You Keep Me Hanging On", but "Stop" here is much more abrasive and stripped back.

The B-side "Asparagus" is possibly a bit more promising in the dance-floor department, being a proper uptempo garage pounder with layers of lyrical absurdity about accepting the universal goodness of American asparagus over the top. I suspect its a metaphor for the kind of meaningless middle-of-the-road demands made by "squares", readers. But the track has a loose, rhythmically simple enthusiastic drive behind it, akin to the kind of garage rock you might suspect Jack White would most enjoy.

There were two What Fours around in America in the 60s, the girl group and some garage punkers from Queens, New York. This is almost certainly the work of the latter rather than the former. Previously known as Sunrisers, they changed their name to What Four for the release of the single "Tossin Ship" on the tiny Rollem label, before finishing their careers with this cover on Tower. I have no other information on them besides that - if you know more, please do pass the details on.

Email ThisBlogThis!Share to TwitterShare to FacebookShare to Pinterest
Labels: garage, sixties, What Four


From the Whitestone/Little Neck area of Queens, NY this band were previously known as the Sunrisers, who'd released a 45 in 1966... and not the NYC girl-group with two 45s on Columbia.
The What Fours


From Revere, Massachusetts. The guitarist of this band was previously with The Weekenders. Two other tracks Don't Laugh and Marshmellow Dream remain unreleased.


A Little Neck/Whitestone, NY band who recorded one further 45 as the What Four. I Saw Her Yesterday, a yearning garage-ballad, is on Fuzz, Flaykes, And Shakes, Vol. 2 (LP & CD).

Thanks, that's interesting... fills in a few of the blanks.

I used this in my morning show as the forgotten 45. Nice little number. The Asparagus song that is.