Reupload - Randy Sparks - Hazy Sunshine/ And I Love You 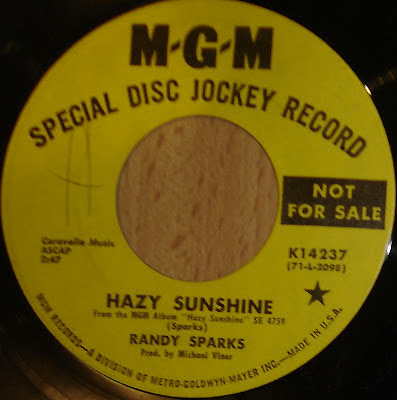 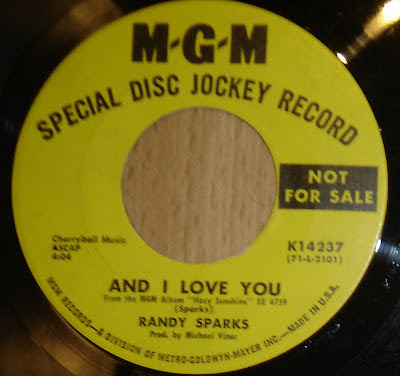 Randy Sparks is a man whose career has been better appreciated in the USA than it has on European shores.  Back there, he had enormous success with his folk ensemble The New Christy Minstrels, a cheery bunch of rootsy individuals who epitomise the more commercial, rustic, family friendly, feel good nature of American folk alongside such other contenders as the Serendipity Singers (though in fairness, The New Christy Minstrels were somewhat more earnest).  Such was their commercial breakthrough in the early sixties that they have a star on the Hollywood Walk of Fame.  Top that, Nick Drake.

Sparks' solo career is spoken about less, but in fact some of the early seventies moments are rather hippy-ish in their feel and not at all unlikable.  "Hazy Sunshine" in particular sums up the mood of flower power a fair few years too late, but is still a pleasant and tranquil listen.  "Nothing is black, nothing is white... If you don't believe in grey, go away" he demands, before informing the listener that new times are a-dawning.  I seem to say this at least once a month on this blog, but had he issued this single a few years before its actual release date he might have been in with a shot at the Billboard Charts, but the fact remains that such references were beginning to seem a bit passé by the early seventies.  As it stands, what we're left with is a pleasant piece of memorabilia which does make the summer seem like an altogether better place to relax in.

I would like to apologise for the pops and clicks present in the mp3s below, but erasing them only had the effect of deadening the acoustic production of the songs on both sides - and on reflection, I decided that an undoctored version of the rather scuffed up single I had was the better option.