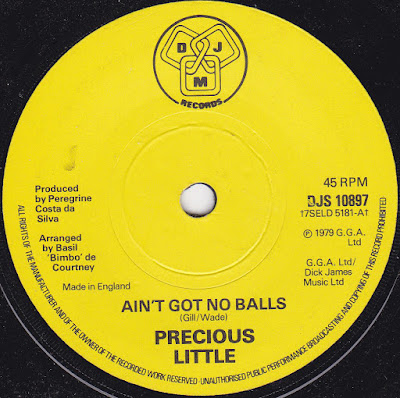 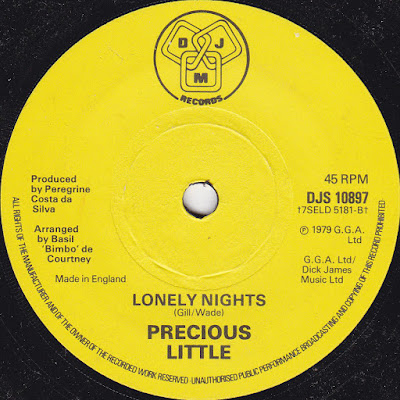 DJM is probably most famous for being the label which Elton John found fame and fortune with, churning out a phenomenal volume of LPs and singles for them in the seventies. Elton was their only big hitter, however, and once he departed to release records through his own Rocket label, it was exposed for what it was - a small label lacking a cohesive vision. Their discography consisted of bits of library music, punk records (Slaughter and the Dogs), records by the Village People before they were famous, rock & roll revival records -  a total mish-mash, and perhaps more importantly a generally unsuccessful mish-mash at that.

This single stems from those weird and underachieving years, and in common with many DJM records of the period, is a rather odd pop record. You could possibly call it Lily Allen before her time if you plugged your ears slightly, but it's a weak comparison I'll probably regret making within five minutes of this post going live. It has a very plastic reggae rhythm and snappy female vocals, but feels very tight, clean, airless and artificial somehow. A bit more vim and chaos and it may have been a hit.

The lead singer for this record seems to be Trisha O'Keefe, who went on to produce Sue Wilkinson's hit "You've Got To Be A Hustler If You Want To Get On" for Cheapskate Records.

The record is also very notable for being a creation of Geoff Gill and Cliff Wade, who in a previous part of their career played a part in many a psychedelic pop single, from Cliff Wade's utterly bizarre "Look At Me I've Fallen Into A Teapot" to Gill's drumming work with near-hitters The Smoke. Stalwarts of the legendary Morgan Studios in Willesden, some of their work can be heard on the essential "House of Many Windows" compilation on Sanctuary Records, which focuses on the studio and its accompanying label.

If nothing else, "Ain't Got No Balls" is a testament to their flexibility, clearly proving that besides weird late sixties pop they were capable of producing work like this. Things got much rosier for them later on when they composed "Heartbreaker", which became a huge hit for Pat Benatar in the USA. Cliff Wade also went on to write "The Woman I'm Supposed To Be" for Tina Turner's "Rough" LP.


Many thanks again for this single

Wow. I never realised Precious Little actually existed outside of that terrible, definitely-not-a-hit filler track on Ronco's "Raiders Of the Pop Charts" compilation.

God, I'd completely forgotten about that, Alex! Thanks for reminding me. I've no idea if they're the same band, but I have to assume there's a connection.

Precious little was a singer called Dee Beale. Her husband Dave Beale was, for a short time , the manager of Jeeny Darren who was signed to DJM