John Bryant - Tell Me What You See/ Poor Unfortunate Me 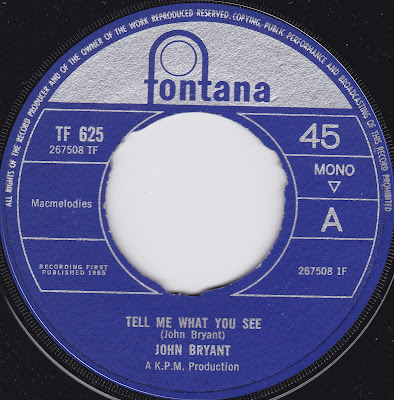 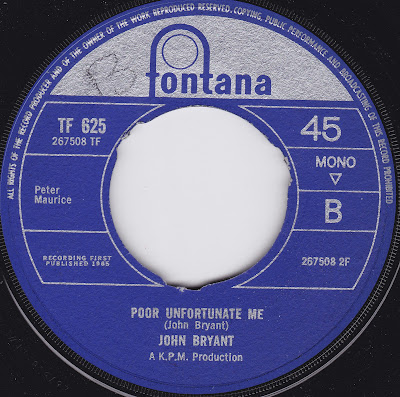 We've touched on the work of John Bryant on this blog before, examining the ultra-obscure (£162 to you, squire) single "A Million Miles Away/ It's Dark", which was handed down to me from my parent's record collection.

That particular single is a likeable and folky piece of work, with (as one reader pointed out to me) a flip that's very reminiscent of Cat Stevens. This single, however, was Bryant's Fontana debut and is an entirely different affair, being a distorted, snarling piece of folk-rock with distinctly Dylan leanings. Taking a very basic garage riff and piling surrealist lyrics on top ("clouds that move beneath the sea/ preachers dressed in leather") it's so beatnik it hurts - and is actually quite forward thinking for a British solo artist in 1965. Donovan might already have been around doing his best Bobby impressions, but he was seldom as rough and ready as this.

This may have been his (flop) debut single, but John Bryant actually enjoyed a long career in music after this, issuing further 45s for MCA, Polydor and Private Stock (the MCA single "I Bring The Sun" is a favourite of many collectors) only really ceasing recorded activities in 1978. He also wrote "Dear Old Mrs Bell" for The Shadows in 1968, and Cliff Richard recorded his track "She's a Gypsy".
These days he owns Abbeywood Films and the graphic design, animation and soundtrack firm Bryant Whittle, from where he's still penning music for commercial use.