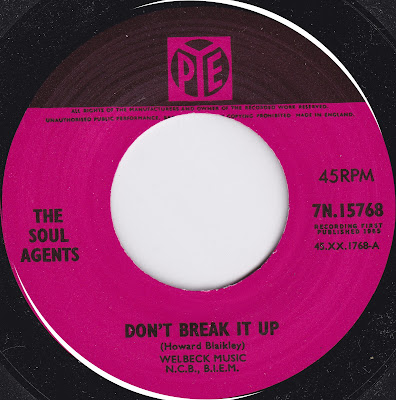 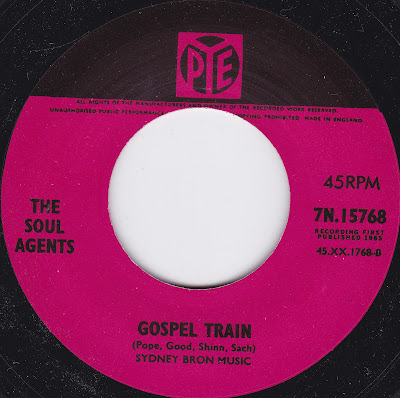 Not the original article, this one - as I keep on reminding you all, I'm not made of money - but a bootleg copy I picked up fairly recently. Still, it's a fine sounding bootleg and worth the fiver I paid for it.

The Howard Blaikley penned A-side has been compiled to death and is available all over the place, but the mighty instrumental flip "Gospel Train" is slightly more elusive. "Don't Break It Up" is a hammond organ driven killer which can be heard on YouTube - filled with a raw, brittle energy and sounding for all the world as if it might be an American garage effort.

The flip "Gospel Train" is a bit of a hidden gem as well, though. It's a swaggering, groovy instrumental with - once again - that sixties organ sound right at the forefront, and some fantastic, energetic, hyperactive drumming. A bit of a buried gem, in all.

The Soul Agents hailed from Southampton and had something of an ever-changing line-up. The cast list on this particular 45, though, was Roger Pope on drums, Don Shinn on organ, Ian Duck on guitar, Dave Glover on bass, and Pete Hunt on vocals. Roger Pope eventually upped sticks to join The Loot, Don Shinn joined Renaissance, and Ian Duck and Dave Glover joined Hookfoot. Pete Hunt, meanwhile, became a session drummer.

Also great is "A Minor Explosion" which came out as a 45 on Polydor.