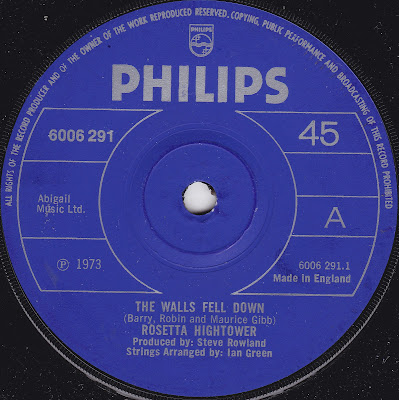 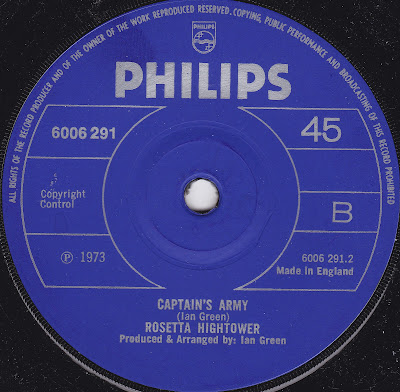 Now here's an obscurity. Rosetta Hightower was an American singer of some renown in the early sixties who hit big in the USA with the girl group The Orlons. Her solo career was perhaps less eventful, however, with numerous respected and beautiful sounding singles emerging - not least her fantastic cover of "Big Bird", of which I've been seeking out a copy for years - but very few crossing over to the mainstream.

This cover of The Bee Gees "The Walls Fell Down" is one example of a single so scarce that it almost never turns up for sale. It is, as you would expect, a soulful and gospel styled take on the Gibbs at their most melodramatic. Rosetta pours all her efforts into it and makes it sound as if it was always meant to sound this way, with a production and arrangement so lavish that it's almost a little bit frightening.

Rosetta's recording career ploughed well into the eighties, and she based herself in England following her marriage to the musician Ian Green. She also delivered numerous notable session performances, not least singing backing vocals on John Lennon's "Power To The People".

Sadly, she passed away in Clapham in 2014, aged seventy years of age.

Days of the Broken Arrows said...

As soon as I saw this name I clicked on your post. Although these '70s sides aren't my cup of tea, Rosetta was one of the great voices in soul. Towards the end of their run at Cameo and on indie labels like Calla, the Orlons cut some incredible soul singles like "Spinnin' Top." They were driven by Hightower's powerful vocals.