Community Chest - You Gotta Start Somewhere/ Get To The Point 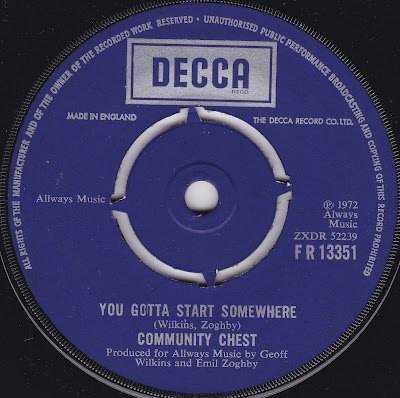 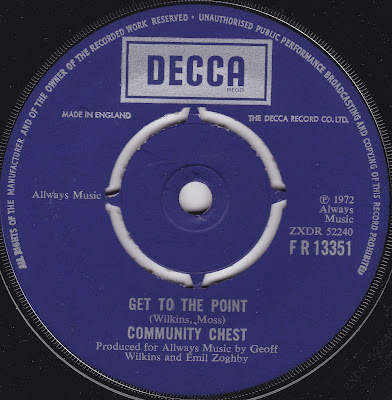 I highly doubt Community Chest were anything other than a studio based group created by jobbing songwriter Geoff Wilkins and South African singer Emil Zoghby. Both names feature prominently on the credits here, and their names also appear scattered across a wide array of other pop and glam flops throughout the early seventies.

Don't click away just yet, though, because "You Gotta Start Somewhere" is actually a lovely piece of pop with one foot in a vat of seventies polish, and the other in late sixties songsmithery. The insistent, chiming organ throughout the track gives it a huge warmth and a strong hook which sounds more '67 than '72, and the slightly bubblegummy chorus is also a delight. This isn't a single that ought to have been a hit necessarily, so much as one that might have been with the right push.

The B-side is actually OK too, with its central chiming riff and faint proto-pub rock delivery. I haven't bothered to investigate the other work of Wilkins and Zoghby in any depth until now, but this might prove to be my springboard for further research.