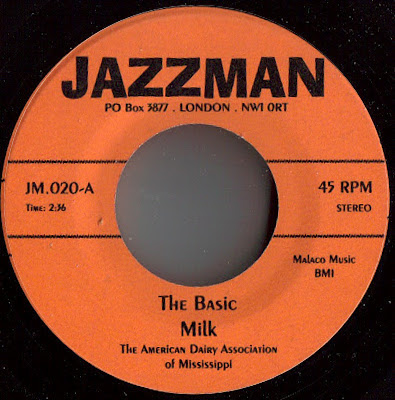 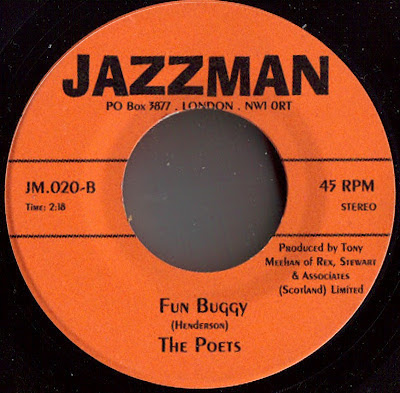 It's very difficult for me to even bother trying to claim any exclusivity with this one. Both sides of this disc are promotional adverts which were re-issued on Jazzman due to their sampled appearance on DJ Shadow's "Product Placement", and as such are rather old news. But still... their inclusion here is entirely under the justification that you're still hardly likely to tune a radio and hear either track in its entirety.

Side One is a piece of funk propaganda put out there by the American Dairy Association of Mississippi, encouraging people to drink more pure dairy liquid presumably through the power of dance grooves alone.  "Milk - the basic! Milk - the basic!" the singers insist persuasively whilst the basslines and rhythms cut powerfully through the mix. And it works. Just writing about this now, I'm persuaded to pull a bottle out of the fridge and glug it down my neck, and that's more than those frigging terrifying Humphrey adverts ever did for me as a child. If I ever find out that the population of Mississippi has a lower rate of osteoporosis than Britain, I will not be surprised.

For the sixties fans amongst you, Side Two is perhaps even more bizarre, consisting entirely of the (by then) washed-up Scottish band The Poets singing the praises of Barr's Strike Cola to an equally funky backdrop. The Poets had one minor hit in Britain in the sixties with "Now We're Thru" and a whole bundle of rather wonderful singles out as follow-ups which (for no good reason at all) fared less well. Presumably "Fun Buggy" was an attempt at getting some cash off the good people at Barr during a somewhat difficult time, but is astonishingly atypical of their other mod-pop fare, swaggering as it does and making Strike Cola sound like the favoured beverage of choice from somebody off "Starsky and Hutch", rather than Scotland's budget-line alternative to Coca Cola which it undoubtedly was.

Most records pressed as promotional items for products are embarrassing, unlistenable trash, filled with session singers trying their hardest to sound sincere about the wonders of petrol, double glazing or postage stamps. Both sides of this re-issue highlight the fact that actually, you can make a product sound amazing by doing little other than getting some funk out. If television advert breaks were filled with noises like this, I'd probably be heavily in debt by now.

Email ThisBlogThis!Share to TwitterShare to FacebookShare to Pinterest
Labels: seventies, The American Dairy Association of Mississipi, the poets