Laurie - I Love Onions/ I Want Him 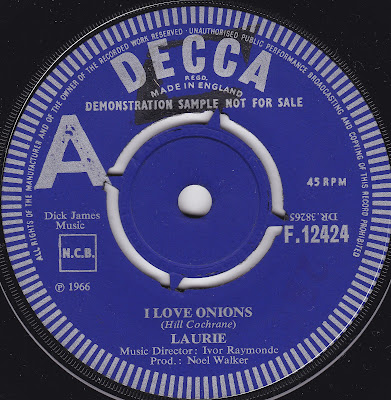 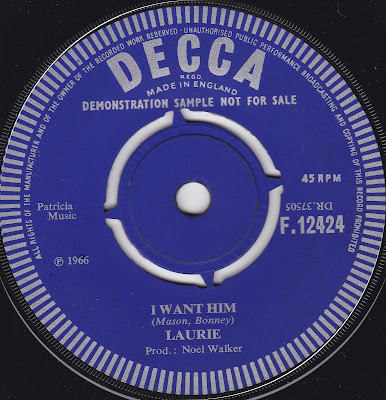 A regular "Left and to the Back" reader once suggested to me that my catchphrase was probably "but you should check out the brilliant track on the B side!" It's not my fault, though. In the sixties and seventies especially, record companies seemed to have a habit of messing things up completely and burying perfectly good songs under a pile of musty mediocrity. And worse, as it happens.

Take the A-side here, for instance. "I Love Onions", is both baffling and bad. In it, Laurie whispers seductively about how much she enjoys the veg in question. Presumably the joke here is that onions are boring, not particularly exotic, and ill suited to such praise, and the contrast between the mundanity of onions and the sultry nature of Laurie's delivery will lead to humour. The song also has a music hall feel which suggests it's trying to emulate the kind of 78rpm tracks which celebrated bananas and watermelons. However you want to explain the joke, it's irritating and deeply unfunny, and should have been left in the can.

The flip, on the other hand, is majestic. It's a vampish track packed with drama, longing and a powerful, epic chorus which contrasts with the subtle, hushed verses, and a perfect slice of mid-sixties pop. It looks as if Graham Bonney - ex-Riot Squad member and one-hit wonder in the UK (thanks to "Super Girl") - had a lot to do with its construction, which explains its confidence and sense of drama. It's over in less than two-and-a-half minutes and leaves you wanting much, much more, from both the track, Laurie herself, and the guitarist who decides to let rip towards the end.


But who was she? Nobody really seems to know, and her stubborn use of her first name only as her stage name means she's incredibly difficult to do any research on at all. She had one other single out on Decca in 1966, her debut release "He Understands Me", but that seems to have been it. It's a bit of a mystery, but one which we'll hopefully have an answer to one day.

Is this the same "I love Onions" as was a hit for Susan Christie in Canada?