Reupload - The Denims - The Adler Sock 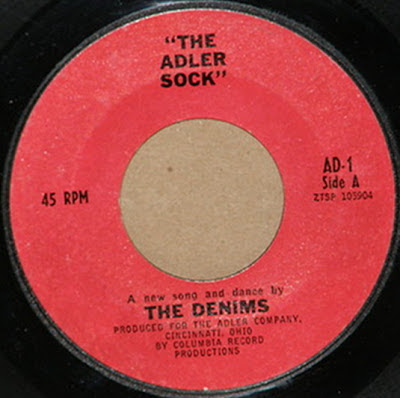 A 60s garage tribute to cheap socks that disintegrate easily in the wash.

Rock and pop groups have always had an uneasy relationship with corporate sponsorship, to the extent that even in the present day (where the majority of musicians will allow their work to soundtrack adverts without shame) it puts a cringe on the face of many.  I myself have an ambivalent and perhaps hypocritical stance to the use of music on adverts - if it's The Fall, Clinic or Vashti Bunyan, my reflex reaction is to think "Well, I'm glad they're finally getting paid some money". If it's The White Stripes soundtracking an 'iconic global brand', I rub my face in my hands and sigh (even if the tune is rather good).

However, much as it may be logical to assume that The White Stripes were the first American garage band (we'll call them that for the sake of arguments, OK?) to take corporate dough, obscure New York racketeers The Denims were probably the first out of the gate in 1965, unless anyone knows better.  They were hardly household names in the USA, but that didn't stop The Adler Company from borrowing them for a promotional 45 about the benefit of Adler Socks, which were essentially cheap wool socks which tended to disintegrate or discolour after only a few washes.  "YEEEEEEAHHHH! DO THE SOCK!" the lead singer screeches as if his life depends on it, while the band kick up a fierce row in the background.  It's utterly unclear why The Adler Corporation thought such an act could flog feetwarmers, but I for one am thrilled they did - this is one of the most bizarre corporate spin-off singles I've ever encountered, a garage nugget with a commercial message attached.  It's likely to sound odder to British ears as this kind of harsh, abrasive punk noise never really made much headway in the UK charts, so the notion of using such an act to advertise clothing would have been unthinkable here.


The B-side is essentially an abbreviated version of the A-side and is included here for curiosity value only.  I can only assume it may have been used as a segment on the radio.

Email ThisBlogThis!Share to TwitterShare to FacebookShare to Pinterest
Labels: garage, sixties, The Denims

One again, many thank David

Shame they didn't get jazz combo The Feetwarmers to record this. Ahem.