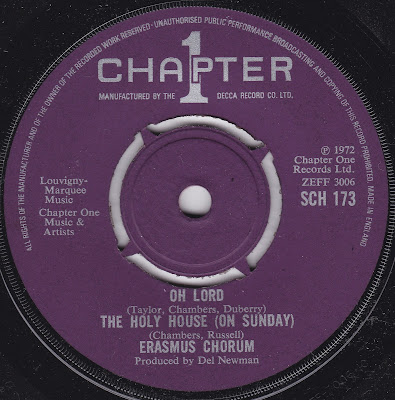 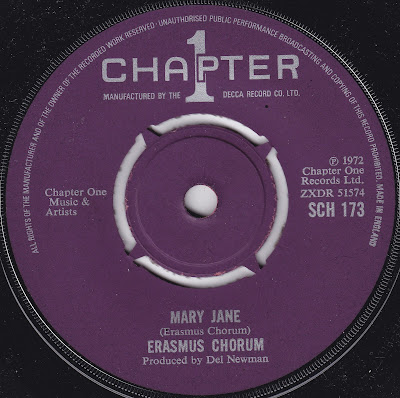 Label: Chapter One
Year of Release: 1972

A curious one, this. An epic, overloaded three track single with two meaty rock tunes on the A-side and a six minute organ-driven slice of angst called "Mary Jane" on the flip, its tight grooves at 45rpm result in a horribly crap and under-powered sound (especially on my scuffed copy) but will probably gain some fans nonetheless.

The A-side appears to be two separate, unconnected rock gospel pieces with an optimistic sheen, and its possible that the odd decision to put two tracks on side one confused the hell out of radio stations. Certainly, the fact that copies of this are near-on impossible to find now indicates a general lack of interest. Nonetheless, both show off a group who were clearly polished performers, and only a slightly limp production lets the side down.


Erasmus Chorum would later go on to release two singles on Alaska Records, including the raucous cult glam rock favourite "Jungle". That particular track drops a rather heavy load on anything on offer here, showing off a screeching, hell raising bunch of glam rockers, and is altogether less pious and serious than this single. Still though, I have absolutely no clue who they were or what else they went on to do, either as a group or as individual musicians. Please do fill free to fill in the blanks if you can.

On Youtube for their "Jungle" song while watching the video a picture of the group is posted (between Tarzan comic TV clips) & they're an ALL Black group! Maybe find a way to post the picture (or link to Youtube U/L)to see if anyone recognizes any of the artists. Useful? Maybe contact the Blogspot that made the Youtube U/L too.