Jefferson - Spider/ Can't Get You Out Of My Mind 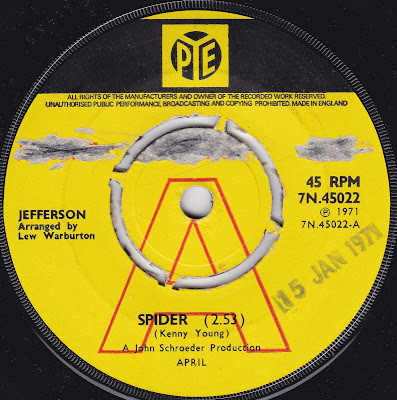 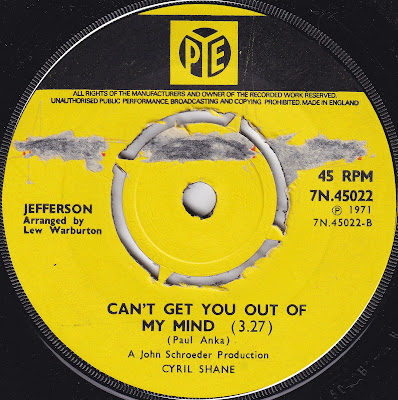 "Spider" is one of those songs which really should have been a smash. First released by its writer Kenny Young (of "Under the Boardwalk" fame) on the CBS label in July 1969, it contained all the drama and raunchiness the hit parade needed. After nobody bit, Clodagh Rogers covered it, but decided to relegate it to the B-side of her hit single "Biljo", where it was later rediscovered in charity shops by delighted people like me.

For my money, though, the 1971 attempt by Jefferson is the one to go for. On this disc, you get to hear everything being thrown at the wall in an attempt to make the record a hit - wailing guitars, thundering orchestral arrangements, rip-roaring vocals and a general air of sultriness combine to create a record which drips with atmosphere. A slightly sleazy atmosphere, admittedly, but one with such a powerful punch that you almost don't notice.


Jefferson - aka Geoff Turton - was an actual proper pop star for a brief period in the sixties, being a member of the Rockin' Berries initially, then going on to have a solo hit with "The Colour Of My Love" in 1969. While the follow-up single "Baby Take Me In Your Arms" was another minor hit in the USA, it failed to shift many copies on these shores, and a car accident caused his career to further lose momentum when he had to spend six months recuperating. "Spider" is very much a product of his post-crash phase, and by the time it was released his name no longer commanded the respect and attention it might have done in the sixties. As a result, copies of this are very scarce indeed, which is thoroughly unjust. It has an edge a lot of his work tended to lack - while most of his material is ballad-orientated, "Spider" showed what he could do when he really wanted to add some power to the proceedings.

When his final single, a version of "The Last Bus Home", flopped in 1975, he seemed to resign himself to the nostalgia circuit, working with a reformed Rockin' Berries. His present whereabouts are unclear.

I like the way the previous owner didn't want this record to be known as an advance promotion copy, scrubbing the words out on the labels - and it's another John Schroeder production, folks!

Yes, I was wondering - with no little annoyance - why ANYONE would do that. Normally it's a point of pride for collectors! I don't know if a shop was given it as a sample copy and wanted to sell it on, but even that would involve selling something with a ripped label.