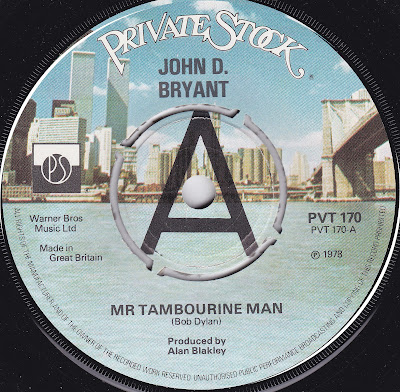 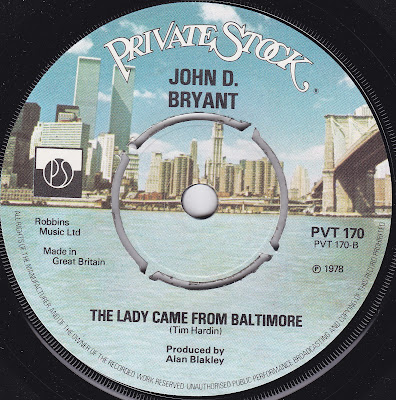 John D Bryant has been on this blog before, and it's difficult to find much more to say about him. Beginning his career as a rather Dylanesque beatnik figure in the mid-sixties and gradually progressing into brighter, more tightly produced singer-songwriter fare, he managed to issue tons of records without once scoring a hit. Of these, debut 45 "Tell Me What You See" is the most abrasive, having a raw, garage feel, whereas the rather Jeff Lynne-esque "I Bring The Sun" is much fancied by psychedelic pop pickers.

By 1978, he'd been taken under the wing of Private Stock Records and "No Strings" and "Mr Tambourine Man" were his last singles. It has to be said, this one is an unusual release, being a smooth-as-silk AOR take on the Dylan classic, feeling strangely like "Rumours" era Fleetwood Mac in places. Clearly it was an attempt at harnessing the nostalgic pangs of an adult hippy audience who had since moved on to rather slicker fare. It has to be said, The Tremeloes' Alan Blakley does a good job in the producer's chair - the strings, female backing vocals and soaring arrangements give the track a yuppie euphoria it almost certainly didn't have before.

On first listen, I found the whole exercise deeply questionable, but by the second I was persuaded of its charms. Imagine yourself stood in San Francisco Bay looking out across the water and listening to this, and man, it's a whole new vibe.