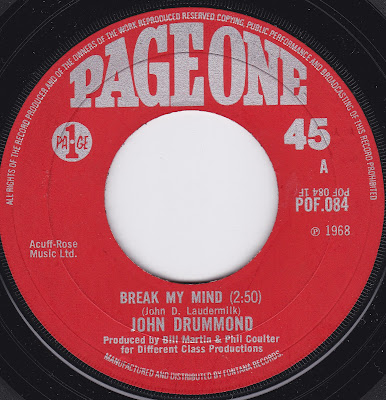 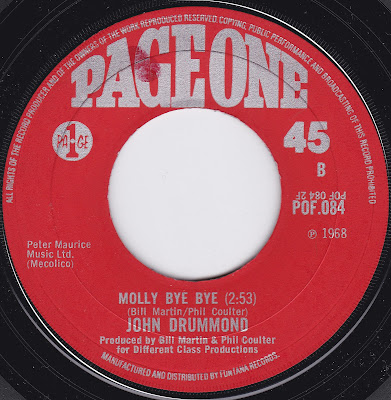 It's interesting how many low selling singles by Irish showband artists got pressed up in the UK throughout the sixties. While the artists behind these records were often heroes of the gig circuit back in Ireland, they usually struggled to pick up attention and airplay in this country, and seemed to mainly sell to Irish ex-pats in the big cities.

Certainly, smaller labels like King (covered in the previous entry) seemed to understand that there was a niche market for this stuff, just as much as the Jamaican ex-pats wanted to be able to buy certain records in their new home country. Pye also seemed to churn out endless Showband acts for UK distribution, and while copies are tough to track down, they usually turn up for 99p in the local Oxfam rather than £100 on Discogs.

John Drummond - occasionally known as Big John Drummond - was a bass player on the showband circuit in his home country, and "Break My Mind" was a fondly received solo release on the Dolphin label just across the water. In the UK, somewhat predictably, it did nowt, and that's a shame. While Loudermilk's "Break My Mind" is a much-recorded country track, with versions being attempted by artists as varied as Roy Orbison, Linda Rondstadt and Gram Parsons, Drummond's take has its own particular snap and swing, and might have brought the track to a wider UK audience.


Drummond would achieve much greater success within the biz as a session man, songwriter and arranger, with arrangement credits for the likes of Kenny and Bay City Rollers in the seventies, and also the legendary Swarbriggs (What do you mean "Who?". They were Ireland's 1977 Eurovision entry, you fools, and an influence on the 'obligatory video' for "My Lovely Horse" off "Father Ted" - see the evidence here).

These days, he lives in County Letrim and teaches music.