The Almond Lettuce - Tree Dog Song/ To Henry With Hope 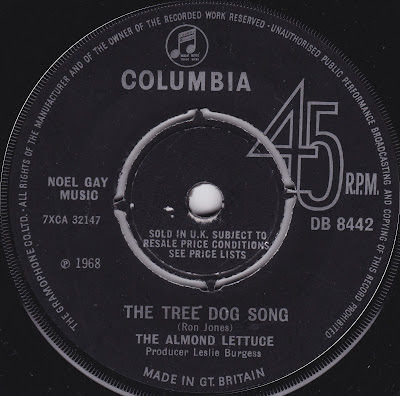 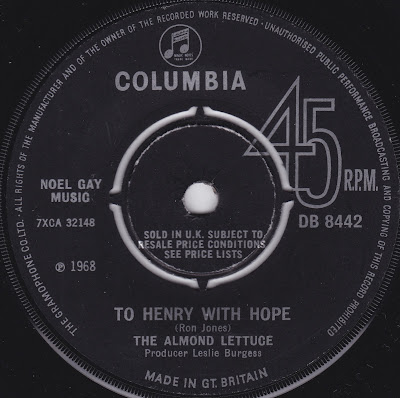 Bouncy but marginally deranged popsike from this mystery band

Arguing about what constitutes a "psychedelic" record has been an intense political debate for collectors for decades now. People the length and breadth of the country have screamed and shouted at each other in pubs demanding to know what exactly is so "way out" about the contents of some of the "Rubble" series. Why, I even have a scar on my forehead from the time someone angrily threw a copy of Barnaby Rudge's "Joe Organ & Co" at me, yelling the words "You couldn't listen to that while taking a trip, you moron, it sounds like a third-rate sixties Bowie out-take" (Some of the above may be lies).

I'm using the word "psychedelic" to describe this record advisedly, then. It's hardly "See Emily Play", but then again... both sides are infused with a pie-eyed, child-like worldview, and arrangements which are prone to sharp diversions. "Tree Dog Song" on the A-side has one of the worst and most irritatingly child-like intros in the world, but gradually settles down into sounding like The Kinks at their most skewiff and countrified singing about God knows what.

The B-side is the real winner for me here, though, delivering absurd lyrics about domestic failures and marital break-up over a melancholy organ sound and insistent, minimal, chiming guitar line. "Oh Henry... I know that the rhubarb pie was under-done/ and your cricket pads were stained with eggy juice" the singer explains, and it's hard not to empathise. Henry sounds like a monster. The song also has a McCartney-esque bounce to it which is compelling.


The identity of The Almond Lettuce is something of a mystery. They had a second single out on Philips in 1969 called "The Magic Circle", which tends to be the more sought-after effort. Nestling on the flip of that record is another absurdity, "Twenty Weary Miles", which contains deliberate flat notes and disorientating subtle key changes and missed beats, and takes more than one listen to settle into. It's not exactly Kevin Shields styled stuff, but it's certainly interesting. When I first bought a copy of "Tree Dog Song" earlier this year, it had to be returned as it was quite warped and the sound was noticeably see-sawing - I ended up having an argument with the seller who seemed to be arguing it sounded fine. If you were being generous, you could assume he was just confused by their other record.

Meanwhile, the "Tapestry of Delights" - a notable bible for all things sixties - has only this piece of information to offer on the band: "A late sixties outfit whose two awful singles are often described as psychedelic but seem far from it". Oh dear. It looks as if I've got a pub car park appointment with Vernon Joynson and Mike Warth to give them both a thorough shoeing.

I agree John, it's a corker. Such a shame it hasn't picked up more attention over the years.