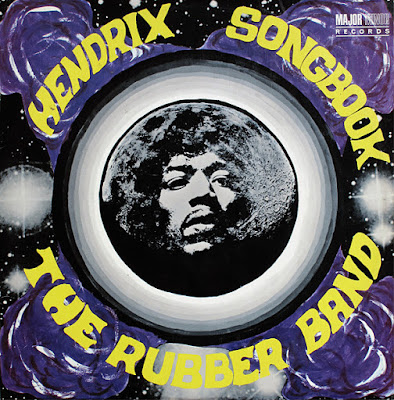 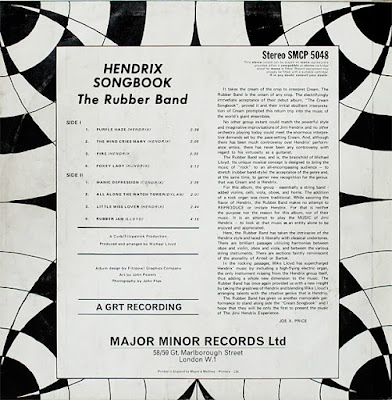 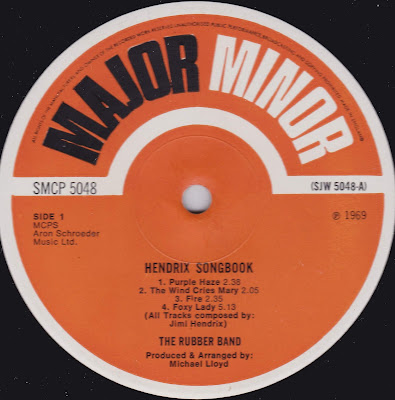 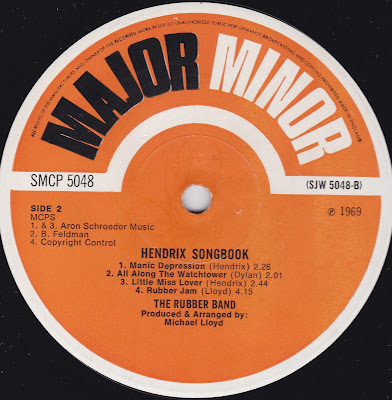 It would be tempting to cock a snook at this LP if you saw it in the racks of your local second hand record shop. It looks cheap, has a crap sleeve, and sixties tribute albums almost always tend to veer towards either bland easy listening arrangements or a group of hurried session musos trying to sound as much like their subject matter as possible. Buy enough of these things and you realise that most of them aren't even good for laughs.

This, however, is unexpected enough to be interesting. It consists almost entirely of uniquely arranged instrumental versions of respected Hendrix tunes, though the inclusion of "All Along The Watchtower" seems to indicate that all concerned were more concerned with whether Hendrix had ever performed, rather than penned, the tracks. It's not the kind of deluxe, carefully crafted culture clash you'd expect of such a project today, but there are enough puffing flutes and wailing guitars to prick up the average Hendrix fan's ears.

The Rubber Band were a Los Angeles based studio group consisting of Stan Ayeroff on guitar, Steve Baim on drums and Michael Lloyd on keyboards, bass and vocals. The player of most interest to "Left and to the Back" readers in that line-up is probably Ayeroff, who was originally in The West Coast Pop Art Experimental Band and subsequently moved into the world of jazz. As a session player  and arranger, he has also worked with Rod Stewart and Roger Daltrey.


Equally curiously, though, Warren Zevon is apparently also playing some additional guitar parts on this LP, albeit uncredited. The involvement of both these individuals doubtless does a lot to elevate the album above bog-standard budget fare.

Sitting on the tail end of the album is a track which has absolutely nothing to do with Jimi and is just a bit of a studio jam, but "Rubber Jam" has quite a few fans online who enjoy the way the band are bouncing ideas off each other.


Wonderful David !!, many many thanks

Any chance of the songbooks by " Doors" and " Creedence" ?

All the best, Albert

There's a Beatles one as well, but it's not very highly regarded.

I have from The Rubber Band following songbooks, if you want a copy mail me on "'albert.1946[[AT]]hotmail.com

Thanks Albert - I may well be in touch soon (but we have the Christmas entries to get out of the way first!)