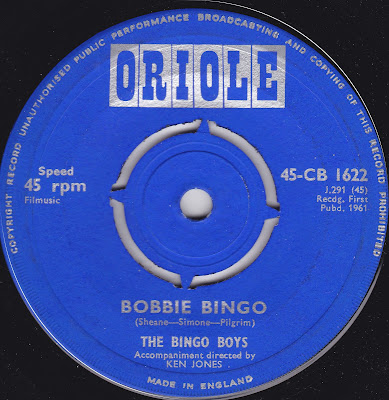 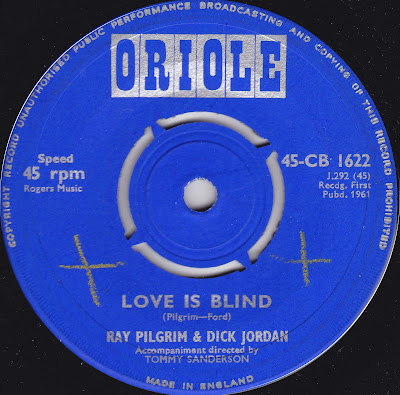 Bingo appears to be a declining business in Britain, with bingo halls no longer featuring in every town centre in Britain. Fourteen years ago, after my wife and I got hitched, we moved into a newly built block of flats next door to a derelict bingo hall in East London. Its interior was no longer filled with the sound of numbers being announced and frantic scribbling. It was, however, possible to hear the odd coo of a roosting pigeon and the occasional shout of "What are YOU lookin' at?!" from the building's resident homeless person as he wandered outside (nobody could ever accuse him of begging, he seemed to spend his life trying to get people as far away from him as possible with threats of violence if necessary).

Fortunately readers, I've moved on in life, though the bingo hall in question still remains derelict, unloved and unused. Back in 1961, though, it would have been filled with the buzz of activity and this little 45 might have been a good theme for it. "Bobbie Bingo" is a number so chirpy and cheeky you can almost imagine the performers winking as they sang it. With a melody not a million miles away from "Me Old Mate Ghandi" off "Alas Smith and Jones", it's certainly very much of its time, with one eye on music hall ditties of yore and the other on the "freak novelty hit" prize.

Sadly, it wasn't to be and the tiny number of copies of this which have turned up for sale in recent years would indicate it sold very poorly. Like a lot of Oriole product, though, it's fascinatingly low budget and English - while they were often squeezed out of the marketplace by the larger labels, their cheap and cheerful attempts to get inside the hit parade often feel as if they say more about that era in Britain than EMI's fussy, precise productions (for example).

The Bingo Boys would appear to be Ray Pilgrim and Dick Jordan, who both feature on the flip under their own names. This was a one-off duet, as both had solo careers on Oriole, with Ray Pilgrim chalking up an astonishing number of recordings for their low-budget cover versions label Embassy ("Travellin' Light", "Return To Sender", "Twist and Shout", "You'll Never Walk Alone", you name it, he covered it). His may not be a familiar name to most, but chances are a lot of people had a copy of one of his singles at the time.

This was a playground hit - a simpler version of the chorus is known to my wife, who was born in '71