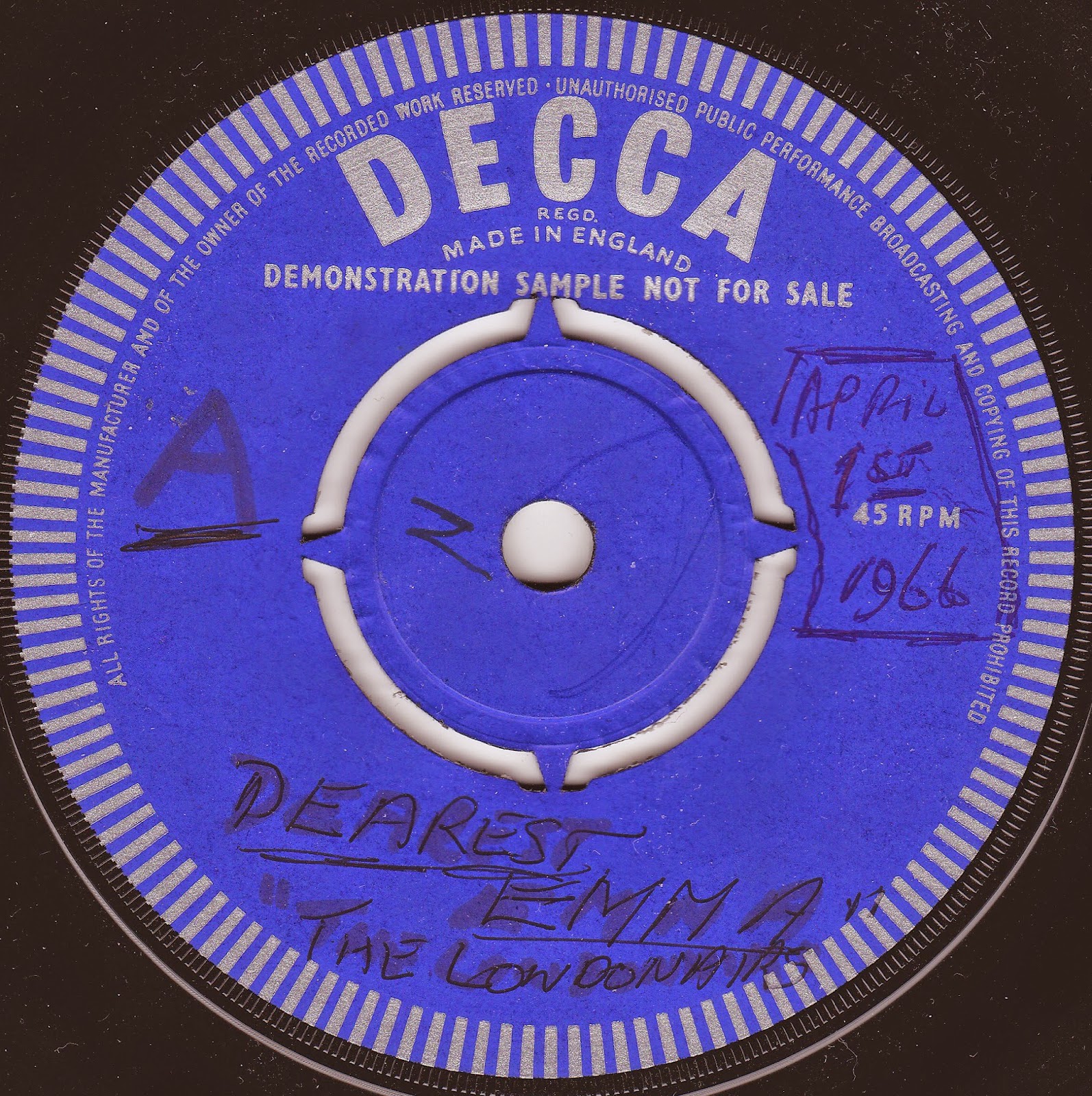 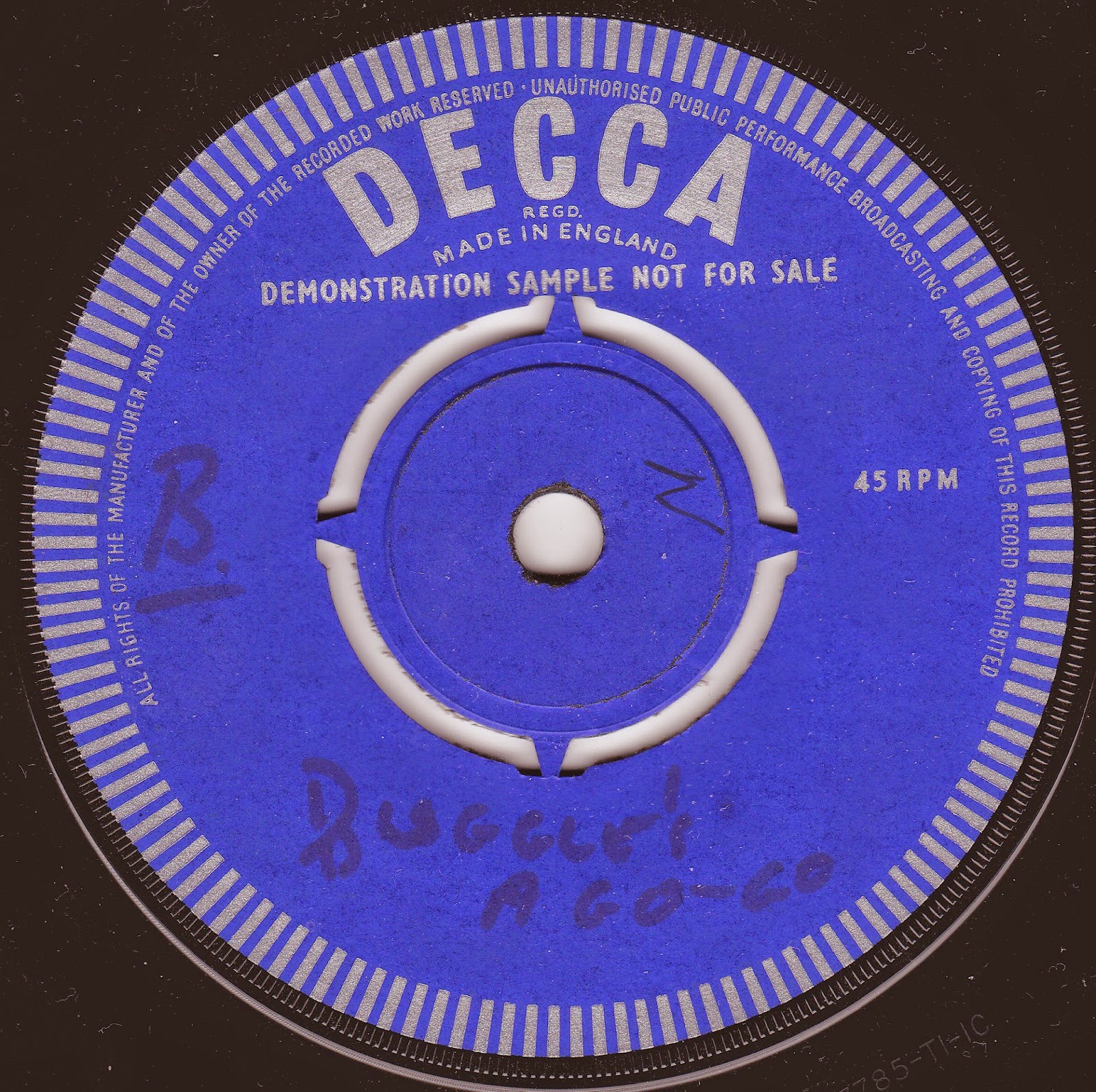 Withdrawn single from some men singing about how much they fancy Emma Peel off The Avengers. It's really not that racy though, readers...

From the fifties right through until the nineties, highly popular television shows tended to begat novelty singles dedicated to them, some official, many unofficial. In most cases, it's the unofficial ones that tend to be the most peculiar and therefore entertaining, albeit for all the wrong reasons. Tim Worthington has done a fine job of championing The Go Go's "I'm Gonna Spend My Christmas With A Dalek" for years now, a sixties cut whose idea of a dalek voice sounds more like Sir Patrick Moore doing an impersonation of a robot. Supremely ridiculous stuff.

"Dearest Emma" by The Londonairs isn't quite in that camp, but as a tribute to Emma Peel of "The Avengers" it is slightly and knowingly silly. "We love all your kinky clothes/ you dress fit to kill/ we'd fight for the right to be the guy with the bill" they chirp rather sinisterly. "We go pale at the things you do to red blooded men/ now that just ain't right to us/ But do it again-".

Right. Basically, this is the sound of a cabaret act singing about how they're tempted to have a fiddle around inside their trousers whenever "The Avengers" comes on the telly. Cut through to its core, and that's all this record is saying, complete with a Carnaby Street swing of a backing. If nothing else, you can surely admire its honesty. In the days before Twitter, some comfort could be drawn from the fact that at least you could get your messages of appreciation across to actresses you fancied via the recording studio.


Sadly, "Dearest Emma" didn't get much of a chance to be heard by Diana Rigg aka Emma Peel. The use of the fanfare from the "The Avengers" theme at the start of the single was unauthorised, and no sooner had Decca managed to get a batch of copies to the shops than they had to be withdrawn. This is a rather scarce record as a result, and indeed my copy is not the officially released version but a pre-release promo which was apparently originally sent to the staff at "Juke Box Jury". I have no idea whether it made it on to the show or not. It did, however, make it on to "Thank Your Lucky Stars" with an appearance which is every bit as odd as you'd expect.

"The Avengers" following was mighty enough that the 1964 novelty single "Kinky Boots" by stars Patrick MacNee and Honor Blackman charted at number 5 in the UK in 1990 following support from the then Radio One DJ Simon Mayo. Nobody thought to give "Dearest Emma" a proper outing around the same time, and it remained rotting in the vaults. Such is life.

Email ThisBlogThis!Share to TwitterShare to FacebookShare to Pinterest
Labels: novelty, sixties, The Londonairs

Actually really fun. Who didn't have a crush on Emma Peel? Thanks for posting this. Love the blog.

Superb YouTube link, especially the juxtaposition with the show's next act. They knew their brass on the B-side, didn't they?