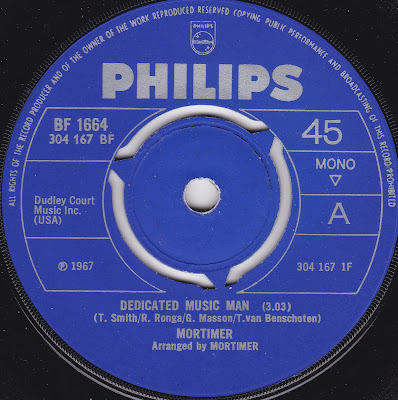 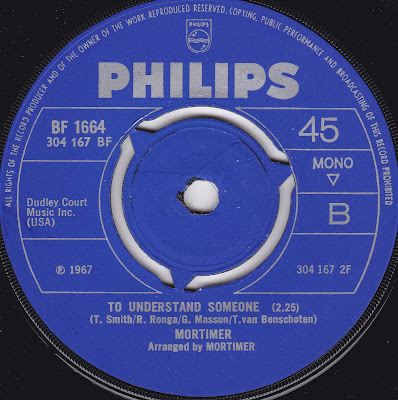 The late sixties saw lot of groups suddenly changing tack stylistically, some because they took the special tablets so widely associated with the later era, and others because they realised the times they were a-changin' and didn't want to be seen as irrelevant. It's impossible to say how many had authentic, pure motivations and how many were just being cynical - and in the end, it doesn't matter terribly if the results are worthwhile.

Mortimer, consisting of Guy Masson, Tom Smith, and Tony Van Benschoten, had largely operated under the name The Teddy Boys, who were a storming garage rock group perhaps best known for their single "Jezebel". By February 1967 they'd changed their name to Pinnochio and The Puppets to issue "Fusion" on Mercury, then they appeared to throw all their electrified instruments into a skip to pursue a rather more semi-acoustic, hippy-ish, harmony driven direction.

Tony Secunda's (Move/ Procol Harum manager) cousin Daniel Secunda swooped down to take over the group's affairs, and they became quite hot property in New York, regularly performing to enthusiastic audiences. "Dedicated Music Man" was probably their closest crack at the hit parade, and showcases their abilities, which bear a strong and striking resemblance to the folk-rock scene of the time. The song has a strong, determined pop chorus as well, but was possibly not powerful enough to stand a chance in the very crowded 1967 marketplace.


In 1968, they left for the UK to audition for Apple Records, and impressed George Harrison enough that a contract was promptly inked. Gifted the Paul McCartney song "Two of Us" prior to any other band recording it, their success seemed assured - but the chaos and turmoil at 94 Baker Street caused them to be dropped without any of their recorded works being issued. RPM put matters right by issuing the sessions on the LP "On Our Way Home" a couple of years ago, but the mayhem inevitably exhausted the band in 1968, and they quit the music business not long afterwards.

Email ThisBlogThis!Share to TwitterShare to FacebookShare to Pinterest
Labels: Mortimer, sixties, The Beatles, The Teddy Boys

Thank you so, David

Great piece of rare 60's music from an unfortunate band that never got the break they deserved.