Reupload - Nicky James - Reaching For The Sun/ No Life At All 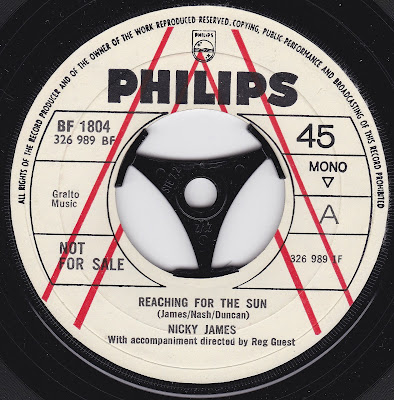 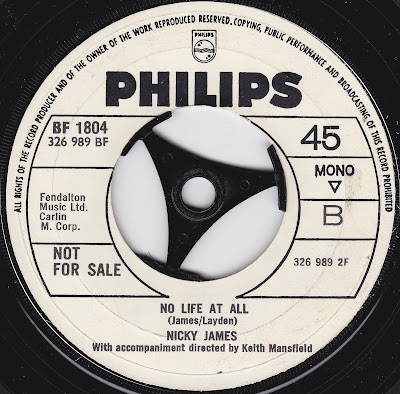 After the first 30 seconds of playing this one, I really thought I'd found a surefire winner here, a record that makes you want to go on Google and check you're not going mad or remembering 60s rock history incorrectly - because initially, it seems unthinkable this wouldn't have been compiled or talked about somewhere else already.

"Reaching For The Sun" is unbelievably confident sounding at first, charging through your stereo speakers like Roy Orbison and Scott Walker riding together on stallions. Reg Guest - who also arranged a great deal of Walker's work - is partly to thank for exercising as much thundery drama from the track as possible, and typically for Guest, managing to find a way of expressing an epic idea without falling back on the worst easy listening cliches. Rather, "Reaching For The Sun" has the kind of clanging bells and rolling drums of a contemporary late sixties track like The Herd's "From The Underworld", and measures up to the best of his other arrangements from this period.

Ultimately though, "Reaching For The Sun" is one of those tracks that promises something awe-inspiring and then slides back into mere goodness. The epic roll of the first minute isn't really followed up with a convincing peak of a chorus, and you're left to wonder what could have been achieved with a few careful rewrites. But even as it stands, it's an unjustly obscure piece of work - not even listed on the artist's Wikipedia page, for shame - which deserves a bit more respect.

Nicky James had a long and varied career from the early sixties onwards, never managing to become much more than a Birmingham scene hero in the process. Born in Tipton, but shifting to Birmingham as a young man, he was initially a member of Denny Laine and the Diplomats before recording solo work for Pye, and was also briefly in The Jamesons with John Walker of the Walker Brothers. Famed locally for his extremely powerful vocals, he issued a brace of singles throughout the sixties, following his acclaimed 1963 Pye single "My Colour Is Blue" with issues on both Columbia and Philips, but none were hits. His B-side "Silver Butterfly" was compiled on to volume 17 of the Rubble series of compilation albums, but beyond that his output has been largely untouched since.


The Moody Blues signed him to their Threshold label in the seventies which should perhaps have seen a shift in his fortunes, but none of the singles or the two albums ("Every Home Should Have One" and "Thunderthroat") charted, and that was the end of his recording career. During the noughties a new album "Black Country Boy" was in the process of being created, but sadly James died following complications with a brain tumour in 2007, and the work never saw the light of day.

I'll definitely be keeping an eye out for other singles of his in the future.