Reupload - Trademark - The Days of Pearly Spencer/ Baby, You Make It Real 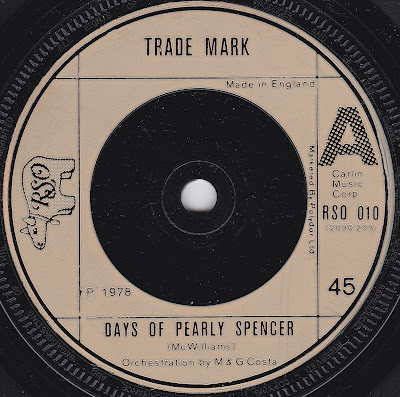 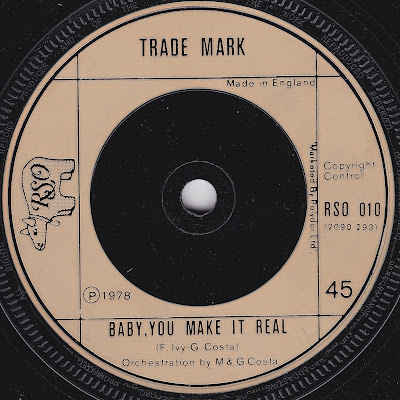 A super-feelgood disco version of "Days of Pearly Spencer"? Well, why not.

"Days of Pearly Spencer" is possibly the most iconic sixties single never to have been a hit in the UK. Largely but not entirely thanks to Marc Almond's hit nineties cover version, it's since been rediscovered afresh and given the respect it deserves. Propelled by the same intense melodrama as Scott Walker's bleakest best and focusing its lyrical attention on some kind of doomed, poverty stricken post-apocalyptic scenario ("Iron trees smother the air/ but withering they stand and stare/ through eyes that neither know nor care/ where the grass has gone") it's the kind of record that probably could only have been written around that time.

Like a lot of doom-laden pop, however, what it does do is tread a very fine line between genius and adolescent preposterousness, which is probably why I nearly hit the floor laughing the first time this version leaked out of my stereo speakers. For this, for reasons known only to its creators, is a pumped-up, adrenalised seventies disco version of "Pearly Spencer". My first thought was that this was such a mismatch of ideas that it was tongue-in-cheek in its intentions, but it seems doubtful. Someone clearly heard the original and noticed, somewhere buried in its grooves, the soundtrack to a pumping Saturday night.

Many liberties are taken with the original arrangement here. The chorus is altered so that the phrase "Pearly Spencer! Pearly Spencer!" is repeated by enthusiastic backing singers, akin to denizens of a doomed city sounding the melodic signal for a Batman or Mighty Mouse styled super-hero. The gothic melodrama is thus reduced to sketchy cartoonish action, film noir translated into an explosion of Zaps and Kapows.


While I can't make up my mind whether this translation is inspired or ridiculous beyond measure, what's interesting is how well it actually works on the second or third listen once the presumably unintentional joke wears thin. Trade Mark have a point - the circling orchestra hook in the chorus of the original does, when sped up, lend itself well to dancefloor urgency. McWilliams's explosive melodrama can actually be adapted to camp finger-pointing. Because disco was such a maligned form by 1978, the logical conclusion to draw is that some disrespect was intended in this cover version, but Trade Mark were apparently French (consisting of the brothers Gorges and Michel Costa) and it's much more likely that they wanted to adapt a popular hit song (in their country) for the local nightclub. For pulling off the seemingly impossible and noticing those possible underlying qualities to "Pearly Spencer", they deserve some kind of medal. And of course, as we're all way past all that "Disco Sucks!" nonsense in the present day and age, we can enjoy the end results with no baggage attached.

As we're on the topic of David McWilliams, though, I'll use this entry as an excuse to praise his sixties output, which is seldom discussed these days. The likes of "Three O'Clock Flamingo Street", "Question of Identity", and "Mister Satisfied" show a folk songwriter who deserves to be remembered for far more than "Pearly Spencer". The compilation "Days of David McWilliams" deserves to be tracked down and savoured by many more people.