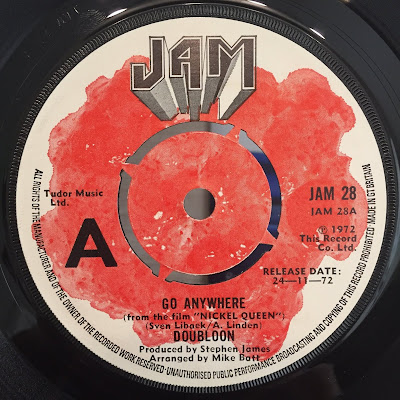 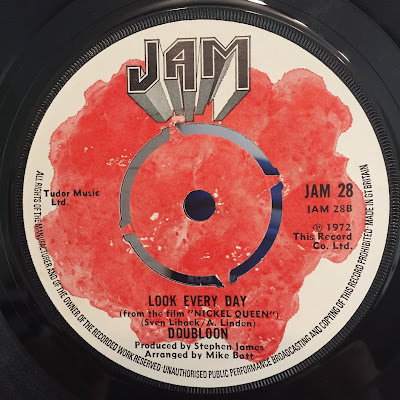 I can't claim any credit for finding this one. Rather, "Left and to the Back" reader Eduardo Ojeda Marins got in touch with me a month ago to tell me that he was a collector of the Jam label, and to ask if I wanted to hear any more examples of their catalogue. Of course I did!

The Jam label has always intrigued me. From its messy toddler-sodding-up-a-formica-table-in-a-B&B design to its connections with stars like Edward Woodward and Mike Read and flash in the pan acts like Blackfoot Sue, it's always seemed like one of those seventies labels without much focus but with lots of curiosities in its discography. Some of these records also sold so poorly that finding copies now is an uphill struggle.

Doubloon was their 28th release, plopping into record stores in November 1972 to rather limited interest. We are handily informed that it could originally be heard in the soundtrack to the Australian film "Nickel Queen", though the name Doubloon was only given to the UK issue - in its native country, the single was issued under the name of the two key performers, Kerrie Biddell and Terry Kaff. The former was a prominent and respected jazz performer down under, whereas the main activity I can see from Kaff apart from this single is a Neil Diamond covers LP.

That makes an awful lot of sense when you hear his Bisto-rich voice introducing the opening lines of this record - "Blimey, that man sounds like he might be heavily influenced by Neil Diamond!" I found myself thinking before even bothering to do any research - but no matter. The arrangements of both sides of this record owe as much to the soul trends of the day as they do to the performer of "I Am I Said", and those sweeping orchestral sounds are as likely to remind you of the slower, sweeter moments on a Northern Soul obscurities compilation.

For me, the flipside "Look Every Day" is the real winner, and was apparently the designated A-side in Australia. While the lyrical sentiments may be a little bit too much like something off a trite Hallmark greeting card, the strident orchestral sweeps around the song are enough to keep it ahead of the general pack.

Now, perhaps I ought to watch that "Nickel Queen" film for myself. Lo and behold, it looks as if YouTube currently has the whole lot up for viewing.

Thanks for your contributions, Eduardo.