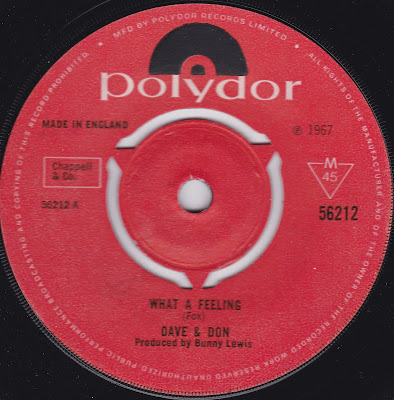 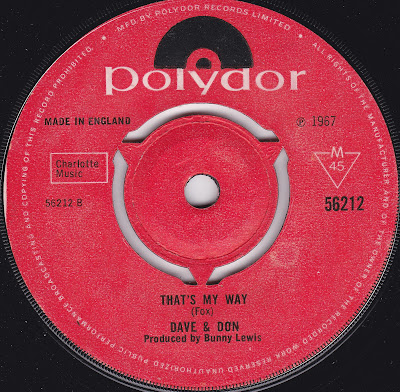 Polydor's sixties back catalogue seems to be littered with singles which, whatever their modern market value, are bloody tough to find copies of these days. Seemingly taking a punt on all manner of independent recordings and club artists as they tried to establish a stronger business in Britain, there are still some nice, shiny offerings buried in their slurry pile.

This single, for example, wasn't a duet recorded by Dave Hill and Don Powell out of Slade, despite the label link - don't be so silly. Instead, it was scene veterans Don Fox and Dave Reid singing in rich baritones together, in a manner which will probably be enticing to fans of the brothers both Walker and Righteous. Both sides were written by Fox, and the A-side "What A Feeling" is simple but optimistic pop which on a fairer week might have sold better. In the heavily loaded release schedules of November 1967, however, it barely had a hope.

Don Fox was born in Stamford Hill in London and had recorded numerous singles before this one, from his debut release "Be My Girl" on Decca in 1957, to his take on "T'Aint What You Do" on the Triumph label in 1960 (after Joe Meek had left the business), but tended to be more of a live performer than a studio star by this point in his career. The same applied to his singing partner Dave Reid, who was mainly known for doing lead vocals for The Ten O'Clock Follies at the Talk of The Town.


Fox would go on to other recorded work, most notably a series of bingo promotional records in the late seventies and early eighties. He was, to the best of my knowledge, still putting together songs and vocal performances until relatively recently. You can't keep a seasoned club performer away from the mic.

Apologies for the pops and crackles on the B-side of this record in particular, by the way. That's the other thing about these old Polydor singles; when you do find copies, they invariably seem as if they've been left in somebody's leaky garden shed for the last forty years.