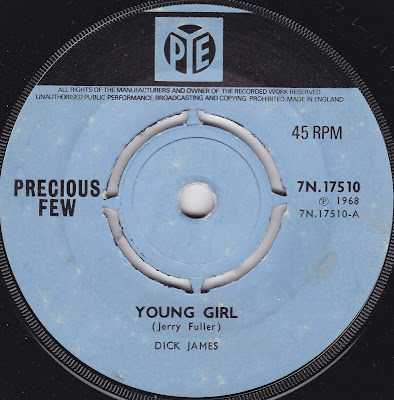 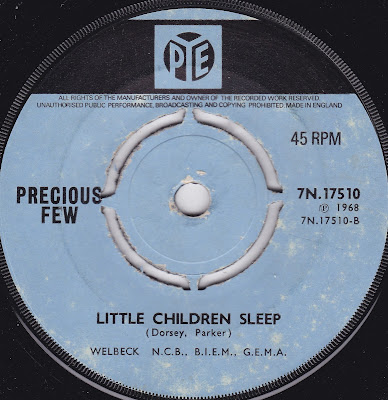 When different record companies release different versions of the same song on one day, there is only one winner...

Given what we now understand about the shadier world of showbiz, "Young Girl" is at best a slightly awkward listen. Lyrically, of course, the song outlines a fairly reasonable personal resolution to avoid "relations" with an under-age girl - if only many convicted celebrities had shown similar restraint - but something about Gary Puckett's howling, hollering, carpet-chewing delivery feels uncomfortable, like he's in Room 101 being tormented in some way. "Get out of HERE before I have the TIME to change my MIND!" indeed - it wouldn't stand up in a court of law, you know. "She just wouldn't leave the room before my desires got the better of me, your honour".

For those of you who would prefer to hear a more subdued version of the song (which still feels a mite uncomfortable) Norwich's Precious Few are here, the boys to entertain you. Pye issued their cover of the song on exactly the same day Gary Puckett's cut was issued on CBS in the UK, leading to a chart stand-off which Puckett clearly led. While he bashed his fists against the wall screaming at the number one spot until it gave way, the Precious Few could only manage two weeks on the "Breakers List" (the "bubbling under" section of the official chart).

Their take on it comes from an anglicised beat perspective, much more flippant and organ-driven. If Puckett sounds troubled, the group here sound as if they're trying to give somebody the brush-off in a flattering way. "Really, no, this has been a lovely evening, but now the truth is out and erm... my lust... sorry, my LOVE for you has been exposed as inappropriate," they appear to be telling the young lady in question. (The "Get out of here" line still sounds dodgy, mind).


Precious Few consisted of Chris Bell on drums and vocals, Brian Crook on lead guitar, Roger Pymer on bass and Pete Reynolds on vocals. They had one more record out, "Pleasure Of You" (with exactly the same flipside as this one) and when that sold exceptionally badly, they seem to have been given the heave-ho by Pye and split up the following year.

hi just wondered if you had these two john deen and the track songs. gin house blues and all together now. cheers

Hi there, I'm Pete Reynolds who was lead vocalist with Precious Few back in 68. The band enjoyed great success in the East of England, and were semi pro. Unfortunately no major breakthrough happened and we disbanded after 18 months together. I'm still around in the local scene at open mic nights and the occasional blues jam.

Thanks so much for dropping by Peter, and I'm glad to hear you're still playing!