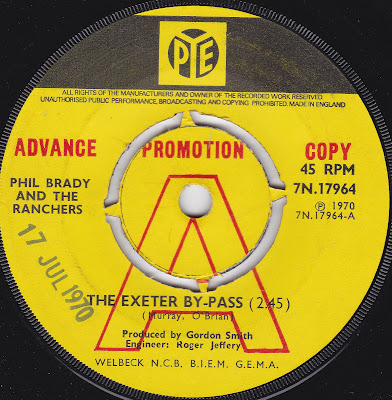 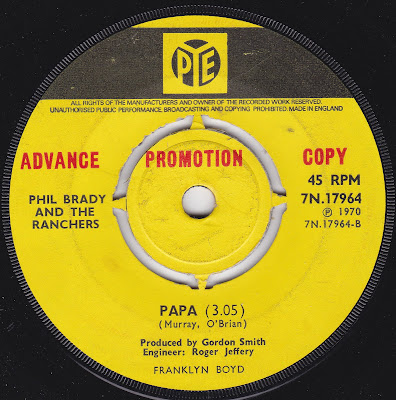 Imagine, just as the Merseybeat scene really began to get swinging, having the sheer misfortune but pure artistic honesty to be fronting a country group in Liverpool. More unscrupulous folk would have dropped the cowboy hat in a jiffy in favour of a Beatle haircut and some copped Motown rhythms, but Phil Brady carried on as he started in 1962 - performing and releasing a series of anglicised country songs, indifferent to the trends around him.

In spite of - or perhaps because of - this singular vision, he began to build a strong live following in the North West of England, which caused the Cavern Club to offer him the chance to release the novelty track "An American Sailor at the Cavern" on their own record label. Sadly, the Cavern's financial demise occurred at almost exactly the same time this record was pressed up, and as a result very few copies made it into the shops. If you spot a copy, snap it up - it's one of the rarest singles of the period, and certainly one of the most unusual Cavern souvenirs.

His other releases are more commonly chanced upon, especially his LPs which were at one point a fairly regular sight in the record sections of department stores in particular. This release for Pye, however, marks his last release on 45, and is a charming, warm and mellow lovelorn contemplation of the Exeter By-pass of all things. You won't hear that in Nashville. In this instance, Brady clearly had the courage to drop distinctly English images into a country track, and it pays off in a way it simply wouldn't if he'd copied from the same rulebook as numerous plastic anglo-cowboys and played the broken hearted, troubled but rugged man from a place he'd yet to visit. "Exeter By-Pass" is equal parts English rain and Southern Comfort (though what an appalling drink that would make in reality).


The flipside is occasionally regarded to be a slightly more "beaty" effort by him, almost a late concession to the predominant trends of the era he'd just left behind, but it sounds solidly country to my ears.

While there were other country artists in Liverpool during the sixties - that port didn't just bring in soul and blues records, you know - Phil Brady was one of the most enduring, performing with his Ranchers into the seventies, and issuing his last LP "Liverpool Country Sounds" in 1976.

Many thanks again David !!

All the best, Albert