Reupload - The Pickwicks - Little By Little/ I Took My Baby Home 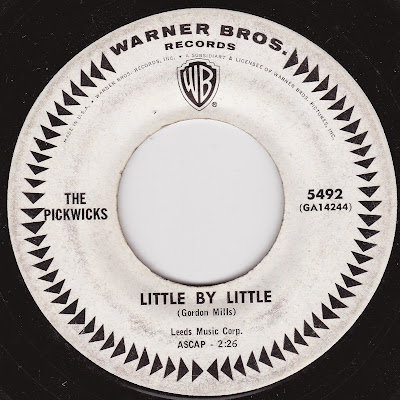 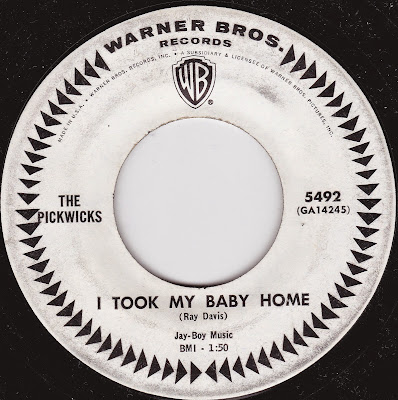 Consisting of Alan Gee on guitar, Malcolm Jenkins on drums, Tony Martin on bass and Johnny Miles on lead guitar and vocals, Coventry's The Pickwicks were one of many sixties beat groups who utilised costumes on stage to strike an eccentric presence. Donning top hats, period costumes and pulling pompous faces, their inventive use of clobber got them noticed, but ultimately didn't score them a hit. Two Decca singles, "Apple Blossom Time" and "You're Old Enough To Be In Love" didn't chart, and this, their final hurrah on Warner Brothers, was equally luckless.

The A-side "Little by Little" is an incredibly minimal, almost garagey effort which isn't so spiky as to be uncommercial, but certainly isn't populist enough to break through. Nonetheless, its insistent keyboard riff and simmering attitude is enticing.

Of far more interest to most readers, I suspect, will be the flip, the Ray Davies composition "I Took My Baby Home". Clattering and crashing into the tune with aplomb, it's a lovely and uplifting two minutes.


Rumours abounded for many years that Jimmy Page played on both sides of this single, but there's now some dispute over whether that was actually the case. Whatever, it's an innocent and joyous slice of vinyl, and isn't really talked about as much as it deserves to be.

Email ThisBlogThis!Share to TwitterShare to FacebookShare to Pinterest
Labels: Ray Davies, sixties, the kinks, the pickwicks

I thought I recognised the "Little by Little", Tom Jones did it as one track on a live e.p. early on in his career - "On Stage" - a brilliant record, well recommended.