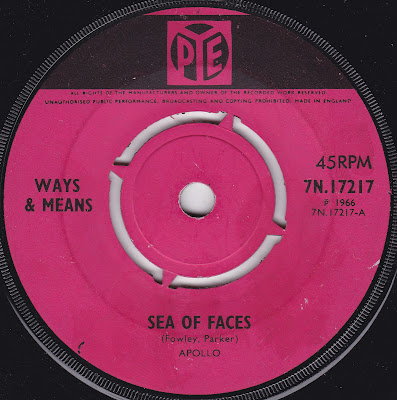 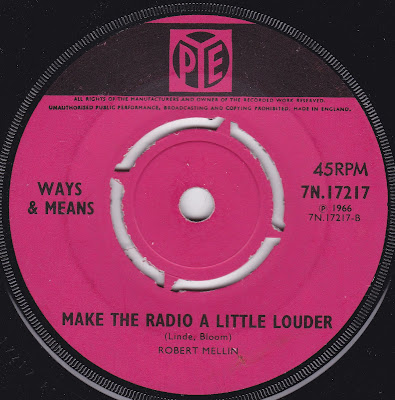 Ways & Means were a British vocal harmony group whose singles were normally quite straightforward pop affairs. Their most famous release, 1968's "Breaking Up A Dream", is sprightly and has a mod-ish kick which has led to it being well-appraised by collectors of that style and era. Their first 45 in 1966, on the other hand, was a cover of The Beach Boys' "Little Deuce Coupe" which was a faithful facsimile.

Between those two releases sat this little ghoul of doom, a vaguely disorientating and psychedelic outing which also sounds as if it's emerging from someone's personal crisis. "Sea of Faces" was released in the dead of winter 1967, and has an intriguing and captivating arrangement. It wails, howls and begs its way from beginning to end, sounding like the Gibb brothers drunk out of their minds on vermouth while lurching about riding a choppy ferry from the Isle of Man to the mainland UK. "I want YOU!" the band screech with unsteady feet, and if I were the lady in question, I wouldn't come back to any of them. It's a bit disturbing, but in a good way.

The flipside "Make The Radio A Little Louder" takes a more traditional soul-pop tune and arrangement, but still has a wobbly, woozy feeling which threatens to disrupt the order at any moment. Ultimately though, it's not as interesting.


The group consisted of Leslie George Goss-Stankowkch on lead guitar and vocals, Roy Dello on guitar and vocals, Ray Fairbrass on bass and vocals, and Barry Class on drums and vocals. After the failure of "Breaking Up A Dream", Class ended up on numerous other sessions on the Trend label, including work by The Foundations, but I can't quite ascertain what became of the rest (and let's face it, if Google can't help you out with a name like "Leslie George Goss-Stankowkch" beyond sending you to a Russian website where Ways & Means are also mentioned, you've had it).

Omg awesome takes you on a trip

Daft question but, with a surname like that, could Roy Dello have been a family member of Pete Dello who wrote "I can't Let Maggie Go"?