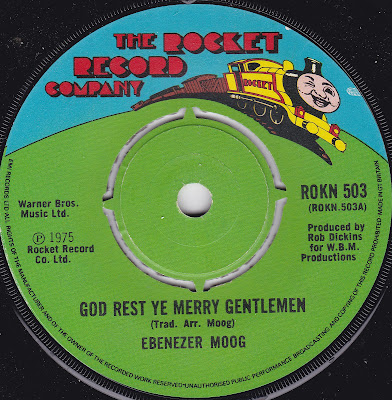 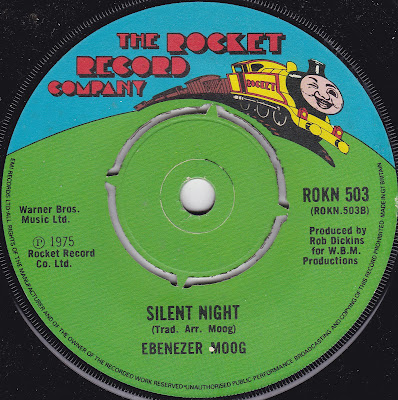 Well, here's a bizarre old release. Consisting entirely of Moog and Theremin twiddling versions of two Christmas carol classics, it's hard to understand how anyone thought it would be in-demand. Analogue synths were deeply exciting and increasingly commercial news in the mid-seventies, but the leading proponents tended to be German groups such as Neu! and Kraftwerk, or the more ambitious art and prog rockers.

Alongside the hairier and more thoughtful synth wizards were, of course, lots of electronic stylings of Bach and Mozart and traditional songs on vinyl, and this little 45 seems to fall somewhere between the two stools. The A-side is cheap jollity - you can probably imagine how it sounds before you even press 'play' - but the B-side is very interesting, and if we flex our collective imaginative muscles, it slightly sounds like a precursor to the Ambient House records of the early nineties (and in fact, if I had to pick one example in particular, Jimmy Cauty out of the KLF's "Space" would be the most obvious). Filled with radio samples of astronauts, eerie rumblings and a simple, sweet warbling electronic take on "Silent Night", it's high on atmosphere. True, you get the vague sense that it might have taken all of half an hour to record, but it's one of the better festive Moog covers I've heard.


There has been some debate about who is responsible for this single. This was its second release, the pervious one falling on Atlantic Records the year before to no real public interest. The fact it dropped on to Elton John's extra-curricular label Rocket has led to speculation that it's Reg Dwight himself fannying about with some synths. The other version of events is that it's actually record label boss Rob Dickens, who is credited as producer on the label.

Whoever is responsible, it's a very strange curio indeed, and one which doesn't seem to have been given an awful lot of attention or space since. Sorry for the pops and clicks on my copy - if you're desperate for better sound quality, head on over to YouTube where the A-side is, at least available for your parties in crystal clear audio.