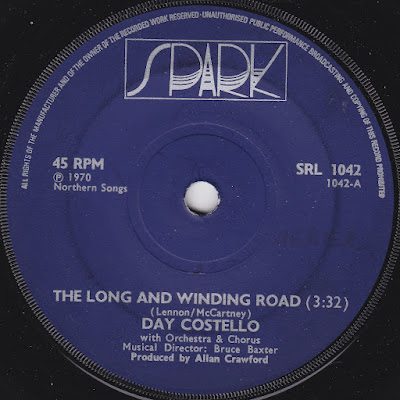 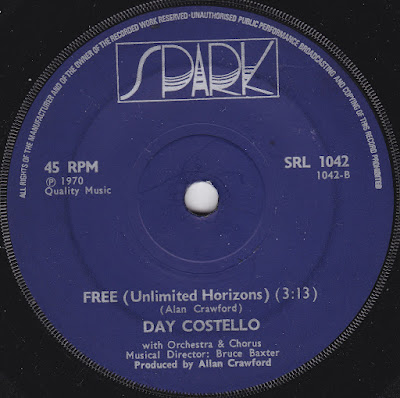 It's common enough to hear talk of how the sons and daughters of successful musicians are almost always eclipsed by their elders and betters. What's perhaps less frequently discussed is how often the offspring of relatively unsuccessful musicians (in chart terms, at least) occasionally produce far better and more lasting work. Amy Winehouse, daughter of Mitch Winehouse, is obviously a recent prime example of this, but there are many others. Children growing up surrounded by music will inevitably latch on to it and sometimes take it to more interesting places than their parents did.

And obviously enough, Day Costello was an identity assumed by Ross McManus, father of "Elvis" Costello. He issued a trio of flop singles in the sixties on the HMV and Decca labels between 1964-67, and this oddity in 1970, which was never really supposed to see the light of day as a 45. Originally recorded for the purposes of a budget covers LP in Australia with vocals by Danny Street, Ross's services were called for at the eleventh hour when the label disliked Street's final performance.

When it became apparent that The Beatles weren't releasing "The Long and Winding Road" as a single in Australia, Fable Records decided he should try his luck in plugging the gap, in much the same manner as Ray Morgan did in the UK. The results were partly positive. The single was reviewed somewhat critically in some quarters due to the rather ponderous approximation of the Phil Spector arrangement - a criticism I would definitely echo - but it managed to pick up enough airplay to become a minor Aussie hit. A big plus in its favour is unquestionably Costello's vocals, which don't improve on the Beatles original (as if), but add a subtly different interpretation. Delicate, considered and with a lot of strong tremelo in them, he sounds like an ordinary man lost on some distant plain.

Why a UK release was required on Spark Records is something of a mystery, but presumably the label felt that they could potentially out-run Morgan's effort (I could confirm this theory if I could manage to find the Spark release date, but the data is unobtainable). It didn't happen, the single sank without trace, and copies are actually pretty scarce these days. My one is a bit roughed-up in places, but unfortunately it's the only copy I've chanced upon in my lifetime.

The flip side "Free (Unlimited Horizons)" is a defiant sounding number which begins sounding vaguely reminiscent of Pulp's "Sunrise" before revealing its true identity as a piece of middle-of-the-road optimistic pop. It's highly rated by some collectors, but I find it slightly too conservative and lightweight.

Costello, of course - or McManus, if you'd rather - continued to do session work, and after this point his most famed effort was probably the R Whites Lemonade television advert in the UK with son Elvis on drums and backing vocals, which somebody really should have put out as a single in some form. If it could be done for the Humphrey adverts, it could have been done for R Whites, for God's sake. But I'm sure you've all got worries and concerns and issues of your own…

Naturally, in a peculiar twist of fate Elvis Costello eventually worked with Paul McCartney as a co-songwriter throughout the eighties and nineties, bringing the circle neatly to a close.

Rather a pretty nice story. Thank you. And yes, it's kinda pleasant songs and interpretations, lost in time.

Did he also record an Italian version of the song as well? (La Lunga Strada Che)