Bear Foot - Frightened/ Girl Are You A Woman Now 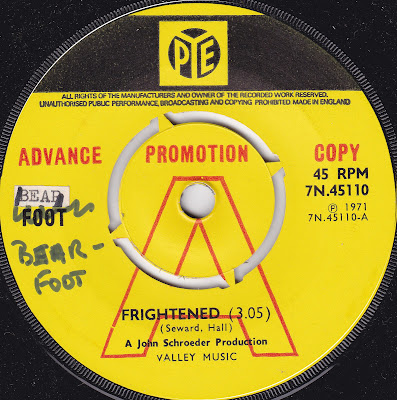 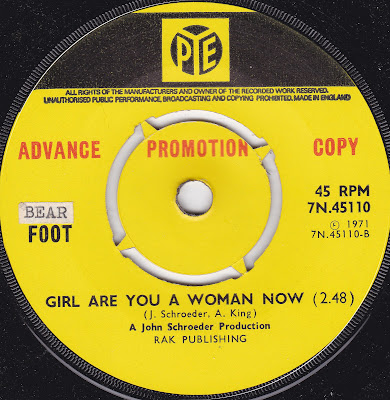 Here's a puzzler. This single is listed by all other sources as being by the group "Bare Foot", but my copy - as you can plainly see - has been corrected with typed stickers to show that the group's name is actually "Bear Foot". This makes some kind of sense, I suppose. If "Bare Foot" is an awful and uninspiring band name, "Bear Foot" is at least a slightly rocky and acceptable pun by comparison.

I'm going to assume that these stickers and doodlings are indicative of a record company error and this was either the group or their management trying to cover up the mistake, because the alternative is that somebody falsely corrected it very carefully for no good reason at all, which seems pointless. That said, the sleeve this comes in has been vandalised so it says "Pye The Shit Makers" rather than "Pye The Hit Makers", so it's terribly hard to know what's the truth and what isn't. Was this the work of somebody who was particularly disgruntled with the label they were signed to, or the "doings" of a disaffected youth with a felt-tip pen, too much time on his or her hands and no youth club to go to? (Anyone who graffitis record labels for no good reason, particularly in ways designed to create confusion fifty years hence, should obviously be given community service at the very least in my opinion, possibly involving tidying up second hand record shops or something).

Anyway, all this speculation over a trifling matter brings us no closer to the record itself. "Frightened" is a slightly quirky A-side which pre-empts the over-accentuated vowels and drawls of the artier side of glam rock. The horn and rhythm section underneath swings in a much more traditional way, though, and stops the track from truly weirding out. Likeable though it is, you're left with the impression that it could have pushed the boat out much further than it did. There's something here which is perfectly fine and an enjoyable listen, but hamstrung slightly by its rigid arrangement - the freak flag could have been flown a lot higher.


The flip "Girl Are You A Woman Now" was written by the producer John Schroeder and had already been recorded in 1970 by the group Jefferson, but never made it further than the acetate stage. It's slightly on the syrupy and icky side, with lyrics asking a young lady whether she's mature enough to begin sexual relations with the singer. "You're giving me ideas!" he sings in a way which suggests it's not her intellectual prowess causing him to change the way he views the world.  "Have your childish emotions gone/ Can't you see that you turn me on?" Yes, we get the picture, lad, and we sense your inner turmoil.

I've no idea who Bare Foot or Bear Foot were, and this single seemed to sell very poorly which presumably put paid to any possibility of a follow-up. If anyone knows more, I'd be fascinated to hear.

If the previews below fail to load properly, follow this link for a long, thirsty drink directly from the audio stream.

The b-side is the winner here. Good pop song. I'll have to pull out my Jefferson CD to compare it and see which one is better. By the way, I'm surprised you don't know this, but Jefferson isn't a group, its a guy, Geoff Turton, former lead singer of The Rockin' Berries, who had several hits in your country. Under the name Jefferson, he had a Top 30 hit in the U.S. with Baby, Take Me In Your Arms.

Here you go, I did know - my memory has just become awful, that's all: https://left-and-to-the-back.blogspot.com/2018/05/jefferson-spider-cant-get-you-out-of-my.html

That or I can only retain so many facts about these groups and artists before things start falling out of the back of my head after awhile!

another lead for you sir, lo & behold the song "frightened" resurfaces!

the lead singer being the writer of the song Chas Seward

Chas Seward and Steve Hall also released it in 1971 when they were going under the name Shillingford Mill, prior to their time as Richmond.

good musicians, but couldn't pick a good band name for toffee! by the way my database tells me I have the Richmond version as an MP3 somewhere in the house.

Yes, the B-side is better than the A-side, very heartfelt, love it. Very rich arrangements and melodic, shame it didn't become at least a minor hit.