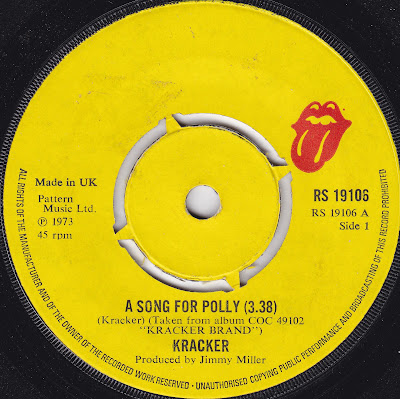 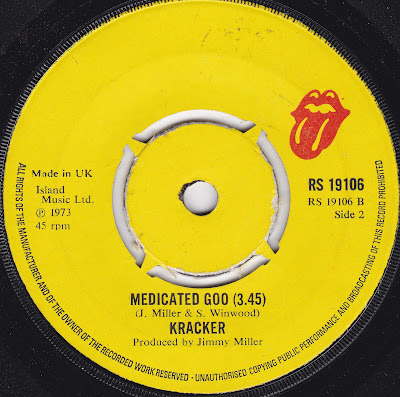 Aside from occasional Keith Richards approved releases by Peter Tosh - man, Keith loves his "heavy, happy dudes" - the Rolling Stones record label was, as its name would suggest, mainly an outlet for group-related activities. If the band's name wasn't on the label, then it was usually a Bill Wyman solo project.

This one-off single by Kracker on the label is a peculiar exception, though. The Stones had a strong interest in the Chicago based group, and after their debut LP "La Familia" came out on ABC Dunhill in 1972, approached them with an arrangement that the second would emerge on the then relatively new Rolling Stones label outside the USA, and the group would support The Stones on tour. Clearly hoping for a shot in the arm from the Jagger and Richards fraternity, Kracker keenly accepted, but watched as this single and the accompanying album "Kracker Brand" didn't really progress them any further ahead.

On reflection, there's nothing here to suggest that the group should have become world-beaters, and if the Rolling Stones were desperate to poach a group from a US label, one wonders why they picked on Kracker in particular. Nonetheless, "A Song For Polly" has a rattling, rolling rhythm and an anthemic quality which will definitely appeal to some readers.

The B-side, though, is likely to be where most of the interest goes. The non-LP cover version of Traffic's "Medicated Goo" shows the band's skills off finely as they plough through the song with gusto. You're left with the impression that most of the appeal probably came from their abilities as a live act, and it's a shame it's often tough to judge that from their recorded work - but the flip gives one of the strongest impressions.

Following this brief stop-over in Stonesville, the group's next LP "Hot" emerged on Dash Records in the USA in 1976, then following disappointing sales, that was that.

The group consisted of Victor Angulo on guitar, Art Casado on drums and vocals, Carl Driggs on lead vocals and percussion, Chuck Francour on lead vocals and keyboards, and Carlos Garcia on bass. From 1983 onwards Driggs acted as the lead singer of Paul Revere and The Raiders, but sadly  both he and Garcia have since passed on.

While their current official biographies tend to make little of it, a certain degree of attention was given to the Cuban origins of some of the line-up at the time, which would certainly account for the flavour of some of their grooves and the title of their debut album.

Slightly clearer audio of these tracks is available on YouTube here and here.

If the previews below fail to load properly, follow this link to go right to the source (and ask the horse, he'll give you the answer that you endorse, he's always on a steady course, blah de blah de blah).

Interesting 'most of top half of label blank' design there. The only other instance I can think of, intriguingly also on a yellow label, was a short-lived concern called Badger which had some sort of link to its Canadian founder, whose label design was completely different.