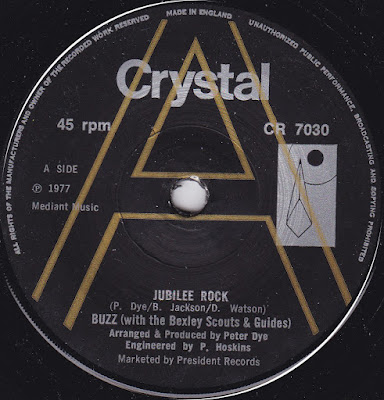 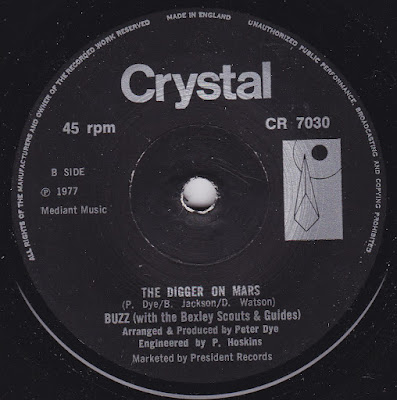 Another record with something unusual and interesting on the flip, and something utterly insubstantial on the A-side. The 1977 Silver Jubilee only really produced one single which anyone still talks about, and that's The Sex Pistols "God Save The Queen". There were others which took a much more positive tone, such as Neil Innes' seldom referenced (by him or anyone else) "Silver Jubilee", or a multitude of associated singles BBC Records and Tapes slipped out. None made any real impact with the public, and it might be tempting to think that's because we're a bunch of Republicans at heart, but I rather suspect it had more to do with the quality of the material on offer.

Take this A-side, for example, a forgettable piece of chugging pop-rock with some boy scouts and girl guides singing on it. It was surely intended as a joyous party record, but nobody involved sounds enthused enough to really carry it. The vocals alone sound like the work of somebody who was keen to get the whole business over and done with as quickly as possible.

The B-side gives us some clues as to why, and makes it apparent that this clearly wasn't a band whose ambitions lay with Royal event novelty tie-in singles. It sounds out-of-time for 1977 but also notable. Clearly taking its cues from both the David Bowie and Pink Floyd back catalogue, "The Digger On Mars" combines whizzing analogue synths, chugging Glam Rock guitars, and a surprisingly ambitious arrangement. Just when you think the song has settled into a knuckle-dragging, punchy glam rut, there's a superb middle-eight which sounds almost prog in its leanings, a "Dark Side of The Moon" inspired piece of spacey introspection. Then the drums burst in again, the song returns, and this time buzzes full-throttle into something much more minimal and repetitive and almost - but not quite - motorik. A three minute song of clear thirds, then, and the last thing on Earth you'd expect to find buried on the back side of a Royal Family tribute record.


As for who Buzz were, they had two singles out on Crystal in 1977, this and "What A Feeling", neither of which made any impact. To complicate matters further, there have been at least seven bands called Buzz or The Buzz since the sixties, and while I'm absolutely positive that this lot have nothing to do with the Joe Meek associated group, it's possible there may be links to the others. I can't begin to unknot the chaos by myself, however, so if anyone has any ideas, please drop me a comment.

If the previews below fail to load properly, why not land your digger straight on to Planet Box and haul them up from there?