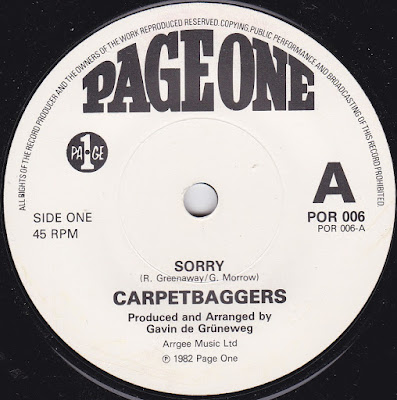 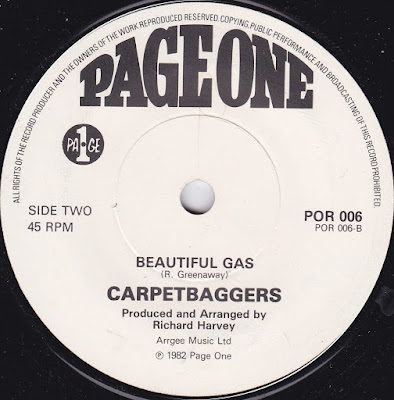 Roger Greenaway is a hugely successful songwriter whose list of tracks would be the envy of anyone trying to get the public's ear. From "Something's Gotten Hold Of My Heart" to Andy Williams' under-praised "Home Lovin' Man", to the... er... unique novelty talents of The Pipkins, his abilities and work with Roger Cook often seemed effortless throughout the sixties and seventies.

Besides his attempts to crack the charts, he also had a successful career writing songs for television adverts, some of them among the most iconic jingles of the period. This is a two-sided single boasting two of his better known efforts retooled for home listening, released on the short-lived relaunched eighties version of the Page One label.

A-side "Sorry" is actually the music used by Allied Carpets to flog their wares to excited home improvers, and would usually be accompanied by the slogan "Allied for carpets for you". However, it's only in this rewritten seven inch guise with the corporate sponsorship removed that you realise how much the damn jingle sounded like a Sparks tribute. "Sorry" suffers from a slightly cheap, Rumbelows synthesiser production, but besides that the jerkiness of the arrangement, the wryness of the lyrics and the vocal stylings smack of Ron and Russ Mael. All this begs the question - how on earth did anyone in the marketing department think that a subtle reference to the Mael brothers might have put people in mind of luxury carpet fittings? Did Ron's hypnotic stare indirectly help to sell many a roll of quality feltback? Could he, even today, resuscitate the ailing fortunes of the carpet showroom and cause a shift away from the modern trend in wooden floorings and laminates? We may never find out.

The flip side "Beautiful Gas", on the other hand is - if you haven't guessed already - an atmospheric synthesiser driven version of the "Cookability" theme for British Gas. I'd have preferred a vocal version myself, but what we have here is interesting enough, sounding strangely futuristic (especially next to its rather more minimally produced A-side) and almost ambient in style. If it doesn't make you want to install a new gas hob in your kitchen, I don't know what will.

Carpetbaggers were obviously a studio group and not a going concern, but it would be interesting to find out who sung on the A-side. If anyone knows, drop me a line.

If the previews below do not load properly, please go straight to the files with this link.