Zenith - A Fool That Was In Love/ Silent Words 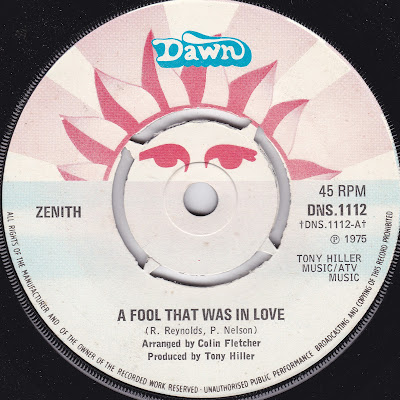 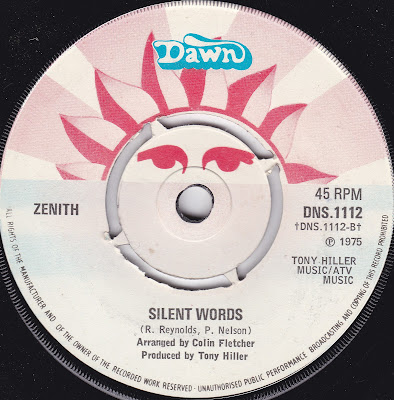 Dawn was a perplexing label. Started by its parent label Pye as a home to more progressive and hippy-friendly artists (akin to EMI's Harvest or Decca's Deram) it started off on-spec with huge hits from the hairy festival jugband act Mungo Jerry and lesser-selling pieces of wonderfulness from more subdued acts such as Heron. Eventually, though, these beardy releases gave way to all manner of commercial rock and pop, including releases from The Glitter Band and Brotherhood of Man.

This 45 definitely exists at the end of Dawn's catalogue marked "sophisticated pop". Only the stray sound of a sitar low in the mix shows any concessions to the label's past - the rest of the track is taken up with hooky choruses and zingy but breezy orchestral arrangements, having more in common with Edison's Lighthouse than anything likely to have got John Peel excited.

Still, it's deftly done, and certainly could have been a hit - the song is determined to make maximum impact, and pushes itself forward with hook after hook on top of a pristine arrangement. That possibly shouldn't be too surprising, given that the group were formed from the remains of White Plains, and their sound practically invented the slick, careful but potent 70s pop formula.


Prior to this, the group had another 45 out entitled "A Face You Won't Forget", but that's far harder to come across than this one. In any case, neither charted and the remaining Plains packed up their kit and set off for other work.

Can't preview the files below? Pop over to Box now.

I love their 2 singles and no great praise can be given a record than to compare it to Edison Lighthouse! Hopefully you can discover and post more of these great pop records!

do u want to exchange blog links?

if u decide to add me to your bloglist I will see in my stats and add u to my bloglist..

no probs if u dont want to.
cheers

Your Affiliate Profit Machine is ready -

Are you ready to make money automatically???

Fantastic single! Both songs are gems. Top notch stuff, thank you for posting it!