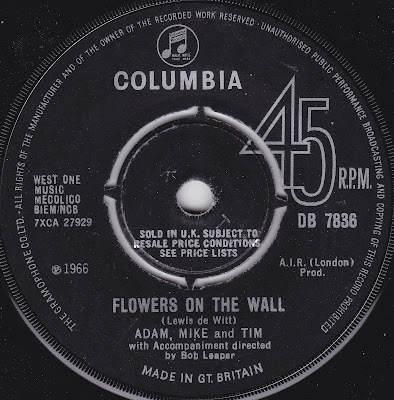 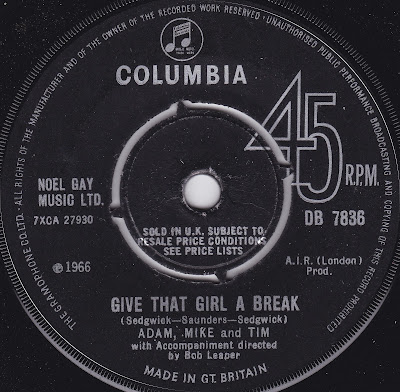 For those about to self-isolate, we salute you

The unimaginatively named Adam, Mike and Tim - who, for a period, were actually Tim-less, having a man called Peter on entirely fraudulent Timothy duties instead - began their recording careers by taking a beat pop direction with their debut 45 "Little Baby" in 1964 before taking a folk rock tack.

Perhaps they knew they were playing to their strengths. With their impeccable vocal harmonies and homespun rustic charm, the trio managed to be both vaguely hip and earthy but also ideal slick, professional filler on TV and radio. Blessed with a large number of "Thank Your Lucky Stars" appearances and some airplay in the UK, they must have seemed likely to have a hit through their continual media presence alone.

As it turns out, the public were broadly indifferent to their records, and even when they recorded an extraordinarily prescient and sitar-drenched cover of the Paul Simon track "A Most Peculiar Man" in April 1966, they remained sidelined. That would prove to be their final recorded effort.

Their fourth single, however, was an utterly ace cover of the Statler Brothers track "Flowers On The Wall" which imitated the harmonies of the original with pin-point accuracy, but also added a certain frantic and sardonic rush, making this for me by far the better version. Gone are the finger-pluckin' hoe-down vibes, and in place is a stomping piece of sardonic Brit-folk.

Numerous people have pointed out that lying behind the chirpiness of "Flowers On The Wall" is clearly the tale of one individual driven to isolation, madness and denial by the world around them. The line "Playing solitaire with a deck of 51" is probably the ultimate give-away - the insinuation that someone is playing without a full deck doesn't need to be spelt out. Perhaps in these times of Coronavirus and self-isolation, though, a new meaning could be brought to the song, though I doubt we'll be so desperate that we'll be watching "Captain Kangeroo" to pass the time.


The group penned B-side "Give That Girl A Break" is also fab, with one foot poking into Beatles ballad territory. In all, this is a non-collectible and cheap and cheerful 45 which packs a hell of a punch on both sides, and all for change from a five pound note.

The group consisted of Adam Sachs, Tim Saunders and Mike Sedgewick, until Tim Saunders departed and Peter Sedgewick was drafted in on Tim duties. Of the members, only Mike Sedgewick seems to have gone on to make more records, releasing "The Good Guys In White Hats Never Lose" in 1968 and a version of "Morning Has Broken" in 1971.

Thank's for making this available. Loved both the A side cover and the B side original.