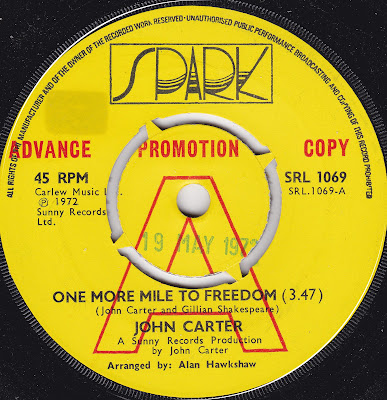 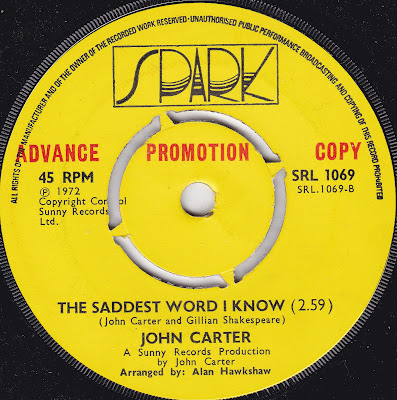 John Carter. How many times have we talked about the man on "Left and to the Back"? Well, we mentioned him as recently as Sunday in relation to Solent's "My World Fell Down". With partners such as Ken Lewis and Gillian Shakespeare, he was an extraordinarily prolific songwriter throughout the sixties and seventies, and in common with most melody peddlers, had far more flops to his name than hits as he toyed, tweaked and speculated with sounds in order to accumulate.

Seldom did he strike out and record under his own name, though "Laughing Man", his duet with fellow writer Russ Alquist, is probably one of my favourite psychedelic era obscurities. This one, "One More Mile To Freedom", is the chalkiest of chalk against that particular Brie, though, being a much more considered, serious attempt at sophisticated seventies pop without a whiff of marijuana induced silliness in the room.

Rather, "One More Mile To Freedom" is strident, triumphant and epic, sounding like something you'd put on your car stereo shortly after quitting the worst job of your life. Once again, it proves that Carter had the enviable ability to shift and change genres and styles to suit the era's demands.


The fact this flopped probably won't have troubled him greatly. Success was just on the horizon with Kincade, then later in 1974 with First Class, and Carter kept the bacon coming home throughout the mid-seventies as well as he did the sixties.

Are the John Carter previews below non-starters? Simply go directly to Box to hear them there.

Brilliant site - many thanks indeed! Paul